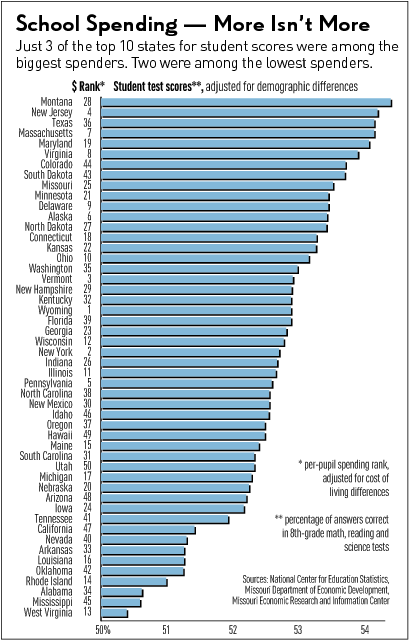 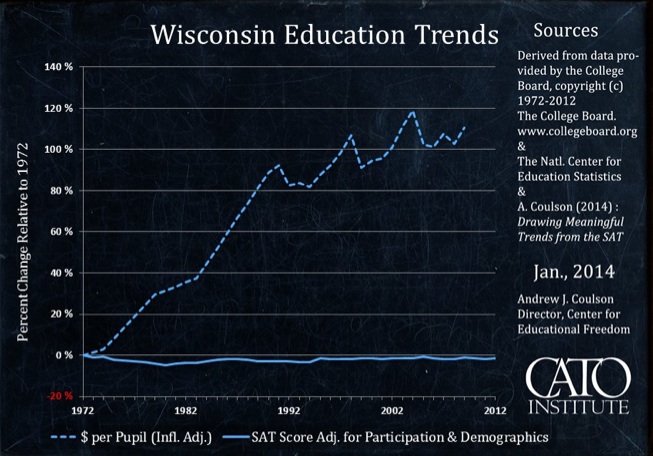 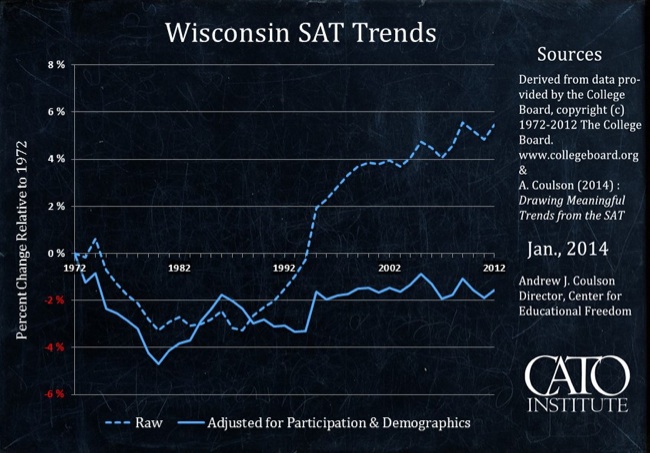 Education looms as both cause and cure for the decline of the middle class and the widening gap between rich and poor.

So it follows that improving education is the only way to raise up the poor, reduce inequality and restore the American middle class.

We all want better schools — right-wingers, left-wingers, even business and labor are on board. Most proposals for improving education come down to the same thing — spend more of the taxpayers’ money.

But that’s what we’ve been doing for two or more generations, and it hasn’t worked. Andrew J. Coulson, director of the Cato Institute’s Center for Educational Freedom, calculates that inflation-adjusted spending per pupil more than doubled from $5,500 a year in 1970 to more than $12,500 in 2010.

So why do some states have better public schools — if it’s not a matter of money? Statistical regressions using the adjusted spending and demographic data find that test scores improve significantly as parents get more education and earn higher incomes.

The intuitive story goes like this: Better educated and richer parents tend to appreciate the value of schooling. They insist on better schools for their children and stress education in the home. School districts that spend more tend to be those where the cost-of-living is higher, where income is higher and where adults are better educated.

It’s not the spending that improves scores, it’s the parents’ high expectations and emphasis on education.

Money can buy a lot in public schools — smaller classes, better teachers, modern facilities, computers and other technologies. So why hasn’t spending paid off in better educational outcomes? The biggest impediment is a government-run school system resistant to innovation, indifferent to student needs and mired in mediocrity.

Wisconsin ranks 12th in dollars spent and 24th in achievement among the 50 US states.

ong-term trends in academic performance and spending are valuable tools for evaluating past education policies and informing current ones. But such data have been scarce at the state level, where the most important education policy decisions are made. State spending data exist reaching back to the 1960s, but the figures have been scattered across many different publications. State-level academic performance data are either nonexistent prior to 1990 or, as in the case of the SAT, are unrepresentative of statewide student populations. Using a time-series regression approach described in a separate publication, this paper adjusts state SAT score averages for factors such as participation rate and student demographics, which are known to affect outcomes, then validates the results against recent state-level National Assessment of Educational Progress (NAEP) test scores. This produces continuous, state-representative estimated SAT score trends reaching back to 1972. The present paper charts these trends against both inflation-adjusted per pupil spending and the raw, unadjusted SAT results, providing an unprecedented perspective on American education inputs and outcomes over the past 40 years.