“Math Power: How to Help Your Child Love Math Even If You Dont’,” the only
book by a mathematician written for parents of children aged 1-10, is
about to go out of print for the second time. Both times the publisher
sold its trade books to another publisher just as it was published, so
none of the four publishers made any effort to publicize it. This time,
however, I have a good offer to buy the remaining copies. I really want
it to get into as many libraries as possible — and many hands. There
are many copies left.
If you can get a library to offer me a thank you note and give me the
address, I will send that library an autographed copy free for the tax
deduction. If you want an autographed copy, I will be glad to send you a
copy for $10. The price on the cover is $19.95, and it’s fine to resell
them at this time. If you can find an outlet or use them yourself, I can
send a box of 18 books for $140. (No autographs on those books because
they will be inside the box.) There are MANY boxes available.
“Math Power” had excellent reviews from both sides of the “Math Wars” when
it first appeared in 1997, and another from “The Library Journal,” but
without some publisher publicity, books don’t sell. It may be that math
is not a popular subject in this culture; there is other evidence.

END_OF_DOCUMENT_TOKEN_TO_BE_REPLACED

Mathematics education seems to be very subject to passing trends – surprisingly more so than many other subjects. The most notorious are, of course, the rise of New Math in the 60s and 70s, and the corresponding backlash against it in the late 70s and 80s. It turns out that mathematics education, at least in the US, is now subject to a new trend, and it doesn’t appear to be a good one.
To be fair the current driving trend in mathematics education is largely an extension of an existing trend in education generally. The idea is that we need to cater more to the students to better engage them in the material. There is a focus on making things fun, on discovery, on group work, and on making things “relevant to the student”. These are often noble goals, and it is something that, in the past, education schemes have often lacked. There is definitely such a thing as “too much of a good thing” with regard to these aims, and as far as I can tell that point was passed some time ago in the case of mathematics.

Children who are turned off by math often say they don’t enjoy it, they aren’t good at it and they see little point in it. Who knew that could be a formula for success?
The nations with the best scores have the least happy, least confident math students, says a study by the Brookings Institution’s Brown Center on Education Policy.
Countries reporting higher levels of enjoyment and confidence among math students don’t do as well in the subject, the study suggests. The results for the United States hover around the middle of the pack, both in terms of enjoyment and in test scores.
In essence, happiness is overrated, says study author Tom Loveless.”We might want to focus on the math that kids are learning and just be a little less obsessed with the fact that they have to enjoy every minute of it,” said Loveless, who directs the Brown center and serves on a presidential advisory panel on math.
“The implication is not Let’s go make kids unhappy,'” he said. “It’s Let’s give kids better signals as to how they’re performing, relative to the rest of the world.'”
Other countries do better than the United States because they seem to expect more from students, he said. That could also explain why high performers in other nations express less confidence and enjoyment in math.

Typical of many math textbooks in the U.S., this one is thick, multicolored,and full of games,puzzles,and activities,to help teachers pass the time, but rarely challenge students. Singapore Math’s textbook is thin, and contains only mathematics — no games. Students are given briefexplanations, then confronted with problems which become more complex as the unit progresses. 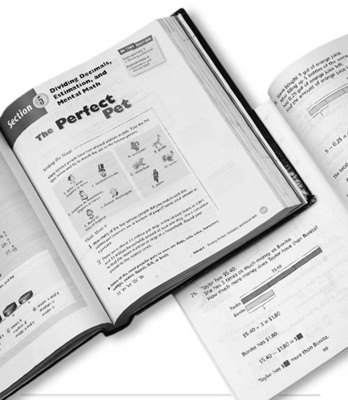 It was another body blow to education. In December of 2004, media outlets across the country were abuzz with news ofthe just-released results of the latest Trends in International Mathematics and Science Study (TIMSS) tests. Once again despite highly publicized efforts to reform American math education (some might say because of the reform efforts) over the past two decades, the United States did little better than average (see Figure 1). Headquartered at the International Study Center at Boston College and taken by tens of thousands of students in more than three dozen countries, TIMSS has become a respected standard of international academic achievement. And in three consecutive TIMSS test rounds (in 1995, 1999,and 2003), 4th- and 8th-grade students in the former British trading colony of Singapore beat all contenders, including math powerhouses Japan and Taiwan. United States 8th graders did not even make the top ten in the 2003 round; they ranked 16th. Worse, scores for American students were, as one Department of Education study put it,”among the lowest of all industrialized countries.”

On Wed, 31 May 2006, Art Rainwater wrote:
Dear Steffen and others;
Thank you for sharing your concens.
The District has always employed outstanding curriuclum leaders in our Teaching and Learning Department. Mary Ramberg has been a leader in Teaching and Learning as have Lisa Wachtel in Science and Mary Watson Peterrson in Literacy and Language Arts.
Please rest assured that I. even more than you, am committed to employing the best possible math corrdinator. The minimum requirements posted are exactly what they say. They are minimum requirements and failure to meet the requirements eliminates the person from consideration immedately without even a further paper screen. Our district has a hiring process that has served us vrey well over the years and this is only the first part of that process.
The breadth and depth of knowledge of mathematics is obviously one of two key components in determining who will be the final pick for this position. However, equally important in the decision is the breadth and depth of pedogogical knowledge. Both of these will be given equal weight and I will not employ anyone who does not have both.
Art Rainwater

Dear Art,
Thanks for your prompt reply.
What caused all of us to write/sign this letter is that the posted job ad does precisely NOT require what we consider two MINIMUM requirements for this position, namely (and I repeat):

I do hope that the school board and the district administration will RESTRICT its search to ONLY candidates meeting these two MINIMUM requirements.
Thanks for your attention!
Steffen

OPEN LETTER:
Dear Members of the School Board, dear Superintendent Rainwater,
We are writing to strongly urge that the new Coordinator of Mathematics have the depth of knowledge of mathematics that we believe is essential for the position. While we are obviously concerned about the preparation of students entering the University, our concerns are much broader than that. The new Coordinator must have a high level of understanding of both mathematical content and pedagogy to independently navigate through the controversies that surround the established standards and published curricula. These “navigational skills” are essential if we are to achieve a program for the Madison school system that meets the needs and aspirations of all the students in the system.

END_OF_DOCUMENT_TOKEN_TO_BE_REPLACED

This is to briefly summarize from my point of view what went on at the MSRI workshop on equity in math education last week. (Vicki was also there and may wish to give her side of the story so you get a more complete picture. It was a very broad workshop, 13 hours a day for 3 days. The web site is down right now, but you can view a cached version here.)
The charge of the workshop was to brainstorm solutions to the underrepresentation of (racial and ethnic) minorities in mathematics and mathematics courses which frequently serve as gatekeepers to other areas.
The participants were thus rather heterogeneous, policy-makers, mathematics educators, mathematicians and teachers, including several groups of young people from various projects who serve as mentors and tutors in mathematics.
The talks and presentations were thus rather mixed, from talks by a law professor about constitutional issues on education to examples of math games played by young tutors and an actual 9th grade math class right with 22 students from a nearby high school right in front of all participants.
There were also some chilling descriptions of the abominable conditions at some schools serving mostly black and native American students.
The usual disagreements between research mathematicians and math educators were not brought to the surface much, but were brought up in many personal conversations during breaks and meals. However, there was general agreement that the underrepresentation of minorities is a serious national problem, and that more resources and better teachers are crucial to its solution.
However, no firm solutions or consensus emerged.
The two things I took away from the workshop are:

One measure of the effectiveness of a high school mathematics program is the success students have in subsequent university mathematics courses. As part of a large-scale study of Michigan students, we analyzed the records of students arriving at Michigan State University from four high schools which adopted the Core-Plus Mathematics program. Those students placed into, and enrolled in, increasingly lower level courses as the implementation progressed; the downward trend is statistically very robust (p < .0005). The grades these students earned in their university mathematics courses were also below average (p < .01). ACT scores suggested the existence but not the severity of these trends. Over the past two decades there has been a growing awareness of the inadequacy of the mathematical skills of American high school graduates. That was the assessment of the 1983 report A Nation at Risk [9]. Many subsequent studies point to the same conclusion. The most recent National Assessment of Educational Progress (NAEP) Report [2] concluded that only 17 percent of US twelfth graders were proficient at mathematics (1). International comparisons also indicate a relatively low level of mathematics achievement by US high schoolstudents. The Third International Mathematics and Science Study (TIMSS) assessed the ‘Mathematics Literacy’ of end-of -secondary students in 22 countries and found that US students statistically outperformed only two countries, Cyprus and South Africa [13]. Related studies suggest that the mathematics courses taken by American high school students are often at a lower level than those taken by their international peers, and that US high schools are offering a wide assortment of courses which lack the focus and coherence found in many foreign curricula [14]. This situation has been of particular concern on college and university campuses, where large numbers of students require remedial courses to bring their mathematical knowledge and skills up to what is required for college-level mathematics and science courses.

Click to view a ward by ward analysis of the differences in the Mathiak / Cole vote. City of Madison Ward map is available here.