“The research around early reading intervention illuminates the complex decision making required to meet individual student literacy needs. There seems to be no one right answer, no quick fix for success. While recent research brings up questions as to the cost/benefit of Reading Recovery, what other supports and options are available? One thing is certain, alternative interventions must be in place prior to removing current systems.” Summary, “Reading Recovery: A Synthesis of Research, Data Analysis and Recommendations,” Madison Metropolitan School District Report to the Board of Education, December, 2009.

How well are we teaching our children to read?
The “Annual Measurable Objectives” under No Child Left Behind for Wisconsin call for all students to achieve reading levels of proficient or better under the WKCE by the 2013-14 school year. Benchmarks toward that goal are phased in over time. The current intermediate goal (ending this school year) is 74%. (Put another way, the percentage of students who are below proficient should not exceed 26%.) The goals move up to 80.5% in 2010-11, 87% in 2011-12, and 93.5% in 2012-13.
71.7% of MMSD 3rd graders scored at or above the proficient level on last year’s (November 2008) WKCE reading assessment (this and the rest of the WKCE data cited here are from the DPI web site). This did not quite meet the 74% Annual Measurable Objective. We should be concerned that achievement levels are going down even as achievement targets are going up: 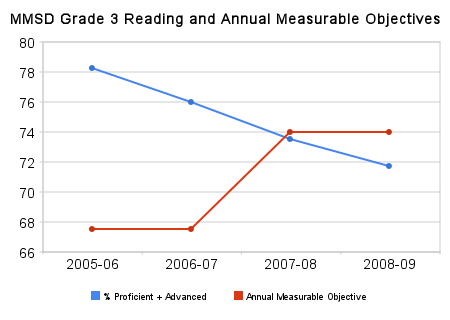 The Annual Measurable Objectives also apply to demographic subgroups, including economically disadvantaged students. Economically disadvantaged students—whose futures are almost wholly dependent on the ability of their schools to teach them to read—and their achievement levels deserve particular attention.
How well are we teaching our children from low-income families to read? 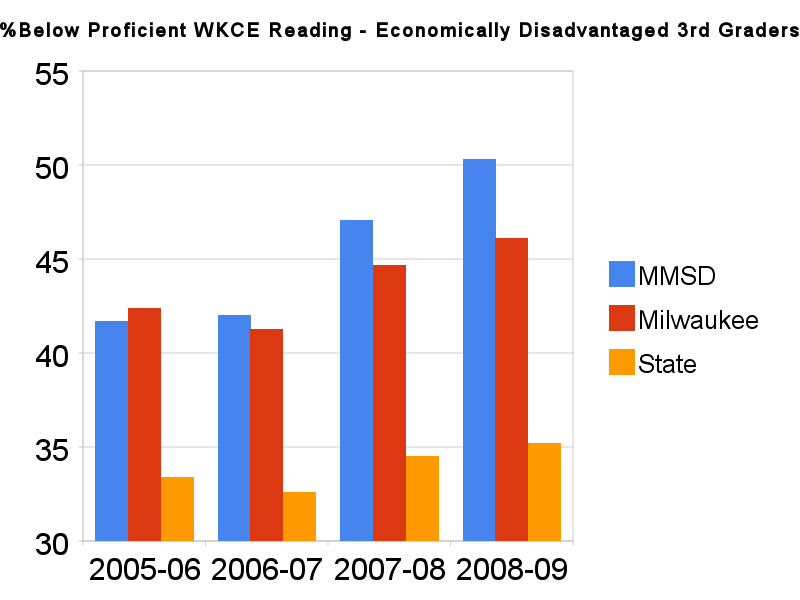 Can we continue to explain/excuse/blame poverty rates for this failure? 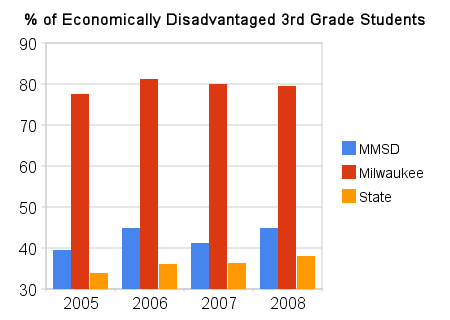 What should we do to acknowledge and address this crisis?

The School Performance Report is the annual “report card” that is required under Wisconsin law (Wi.Stat.115.38) to be compiled and published for each public school and public school district. DPI’s recent announcement (noted here) that selected School Performance Report information will now be available online at the DPI web site is a step in the right direction, but this important tool for school accountability and information for parents and the public has yet to reach its full potential, due to inconsistent compliance with the requirements of the reporting law.
The School Performance Report has been required since 1991. The items that are to be included in each report are (emphases added):

(a) Indicators of academic achievement, including the performance of pupils on the tests administered under s. 121.02 (1) (r) and the performance of pupils, by subject area, on the statewide assessment examinations administered under s. 118.30.
(b) 1. Other indicators of school and school district performance, including dropout, attendance, retention in grade and graduation rates; percentage of habitual truants, as defined in s. 118.16 (1) (a); percentage of pupils participating in extracurricular and community activities and advanced placement courses; percentage of graduates enrolled in postsecondary educational programs; and percentage of graduates entering the workforce.
2. The numbers of suspensions and expulsions; the reasons for which pupils are suspended or expelled, reported according to categories specified by the state superintendent; the length of time for which pupils are expelled, reported according to categories specified by the state superintendent; whether pupils return to school after their expulsion; the educational programs and services, if any, provided to pupils during their expulsions, reported according to categories specified by the state superintendent; the schools attended by pupils who are suspended or expelled; and the grade, sex and ethnicity of pupils who are suspended or expelled and whether the pupils are children with disabilities, as defined in s. 115.76 (5).
(c) Staffing and financial data information, as determined by the state superintendent, not to exceed 10 items. The state superintendent may not request a school board to provide information solely for the purpose of including the information in the report under this paragraph.
(d) The number and percentage of resident pupils attending a course in a nonresident school district under s. 118.52, the number of nonresident pupils attending a course in the school district under s. 118.52, and the courses taken by those pupils.
(e) The method of reading instruction used in the school district and the textbook series used to teach reading in the school district.

It should be noted (and is acknowledged by DPI) that the School Performance Report information on the DPI site does not cover all of these items.
In 2005, the statute was amended to require that parents be alerted to the existence and availability of the report and given the opportunity to request a copy, and to require that each school district with a web site post the report on its web site (amended language italicized below):

This information, if fully compiled and made available as intended by the statute, could be a valuable resource to parents and the public (answering, perhaps, some of the questions in this discussion). There may be parents who are unaware that this “report card” exists, and would benefit from receiving the notice that the statute requires. For parents without access to the Internet, the right to request a hard copy of the report may be their only access to this information.
Districts who do not post their School Performance Reports on their web sites may do well to follow the example of the Kenosha School District, which does a good job of highlighting its School Performance Reports (including drop-down menus by school) on the home page of its web site.

At a school where every other reform had failed, Montie Apostolos was the last, best chance for students to succeed.
She had been brought in because she produced impressive gains in reading test scores at her last school. She was tough. Her lessons were rooted in the best research, and she was trained for inner-city schools.
She’s an uncompromising, charismatic 56-year-old grandmother with an irresistible life story: She had fought off water cannons, attack dogs and white supremacists to get her own education in the segregated South. Nothing her students faced was going to surprise her.
But on a fall morning last year, at Sherman School of Excellence on Chicago’s South Side, Apostolos’ steely demeanor met its match.
A baby-faced 8th-grade boy stood at a lectern analyzing a poem. In a squeaky voice, he talked about feeling alone and neglected, like the narrator. And, matter-of-factly, he ticked off events that brought him there.
He had been taken away from his crack-addicted mother. His brother had been shot in the heart and head during a gang fight. His young cousin had died of neglect.