On November 7, Madison area residents will be asked to vote on a referendum concerning our local schools. While the referendum has three parts, this paper will focus on the first part – the construction of a new school on the far west side, representing over 75% of the total cost of the referendum.

This report will argue that the most important determinant of whether or not a new school should be built on the far west side (or anywhere else in the district), is whether the long-term outlook clearly indicates it is appropriate. Otherwise, the problem should be considered temporary, with temporary measures pursued to address it. However, the situation here suggests strongly that the problem is a more permanent one, requiring a “permanent solution”, the building of a new school.

This report will not attempt to forecast specific enrollment figures for the Madison Metropolitan School District (MMSD) – such an effort would take several months to do properly. Instead, it will focus on the TRENDS that support the conclusion a new school is warranted.

The charts below compare the MMSD’s enrollment projections with current capacity, by school. They are sorted by middle school area. When, for example, it shows Leopold at +76 in 2009, it implies that current projections show that school being over-capacity by 76 students in the 2009-10 school year.

The situation over the next several years is disturbing. The West & Memorial Area Attendance Task Force examined it thoroughly over a several month period, with significant public input. A new school on the far West side, as well as a modest improvement and expansion of the Leopold campus, was their best proposed solution.

Nevertheless, some question whether a new school is appropriate, particularly given underenrollment on the near East side, a slowing housing market, and the substantial cost involved.

It is difficult to predict with precision what will happen from one year to the next. MMSD’s 3-5 year enrollment projections portend serious overcrowding. Nevertheless, one must be cautious about building a new school unless it can be clearly demonstrated that it will be needed in the long-term, more than five years out (preferably 10-20 years out, or longer).

The long-term is the key. New schools will be in place for decades to come. Boundary changes are in effect for years, and hard to reverse. The rest of this report will look at MMSD’s long-term picture, and will focus on three areas that shed ligwest side:

Madison’s population is projected to increase by over 33,000, or about 15%, over the next twenty years. Meanwhile, the populations of Fitchburg and Verona are each anticipated to grow at 2-4 times the rate of Madison itself.

It’s not surprising Madison’s population has been growing so steadily, given the area’s offerings: an attractive environment, a diverse economy, good schools and a family-friendly place to live. This continued area growth is vital to the question at hand, for it underlays the argument enrollment will continue to increase for years to come.

The Beltline runs essentially east-west on the south side of Madison. South of the Beltline, and to the west of Verona Rd (Route 18), the MMSD comprises an area of approximately 26 square miles. Imagine High Point Road (just before the Beltline hooks north) extending due south all the way to the furthest reaches of the district, virtually on the outskirts of the city of Verona.

For the table below, MMSD student count data was set against a map of the MMSD boundaries. While the map shows a cluster of schools on the eastern half of this southwestern corner of the MMSD, it is apparent there is potential for many more students to move into the area west of the imaginary High Point Rd line.

The Madison Planning Commission projects 13,000 homes over the next several decades on the far west side of town, with their forecast obviously applying to a far west area larger than the simple area described here. It is extremely easy to imagine many more hundreds of elementary school kids moving into, and growing up in, that far west corner of the district. Meanwhile, it is extremely difficult to imagine that not happening.

To understand demographic trends concerning age, and their impact on school enrollment, it will be helpful to look at the number of infants (less than 1 year old) in the United States since World War II.

While one can question whether infant count will continue to rise steadily through 2030 (it is difficult for the Census Bureau to try to time another drop), it is significant births have been increasing for the past 9 years, with no sign of soon reversing. 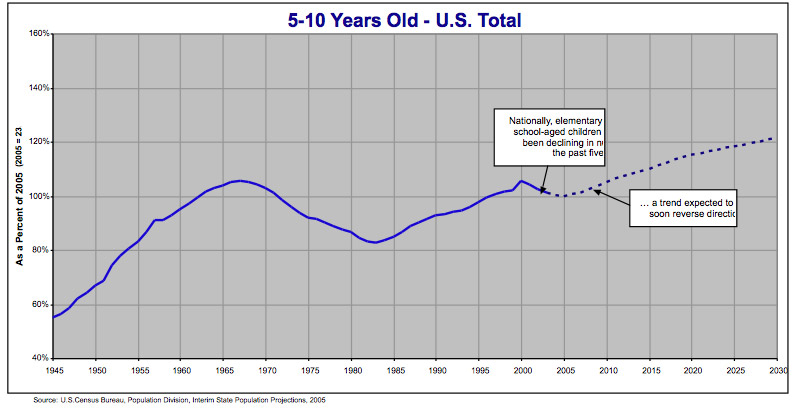 The MMSD elementary school enrollment has conformed to the general US pattern, although with more gyrations, and a tendency to lead the nation by about 2-5 years (perhaps because it is a university town). 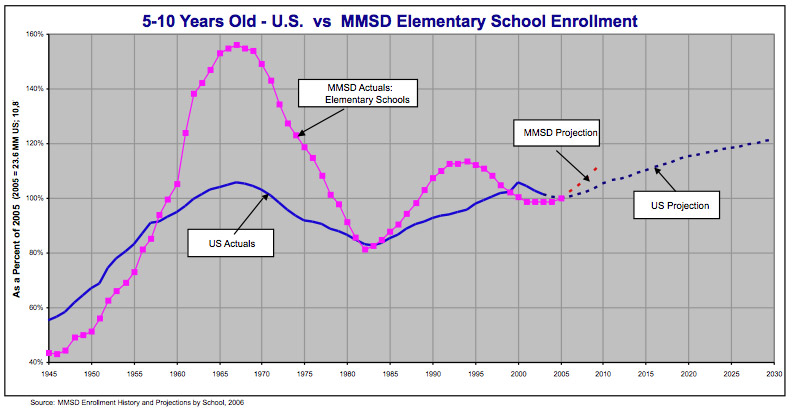 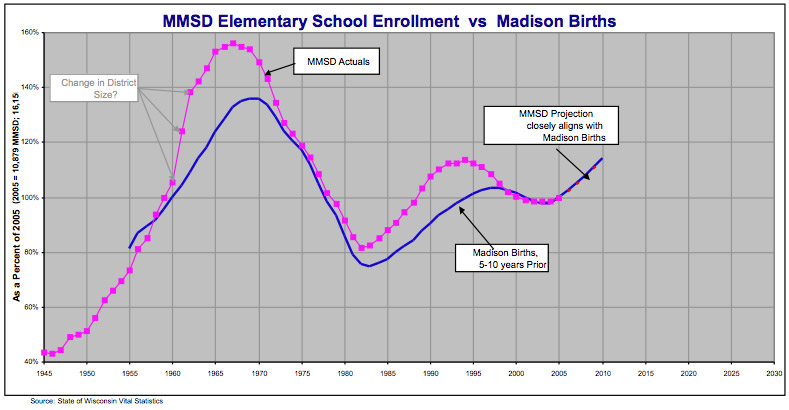 The decline in births in the early 1990’s in Madison, as well as throughout the country, explains much of why MMSD middle and high school enrollments have been declining. We can expect their enrollments to continue declining a few years longer – and then to follow the upward path already established at the elementary school level. 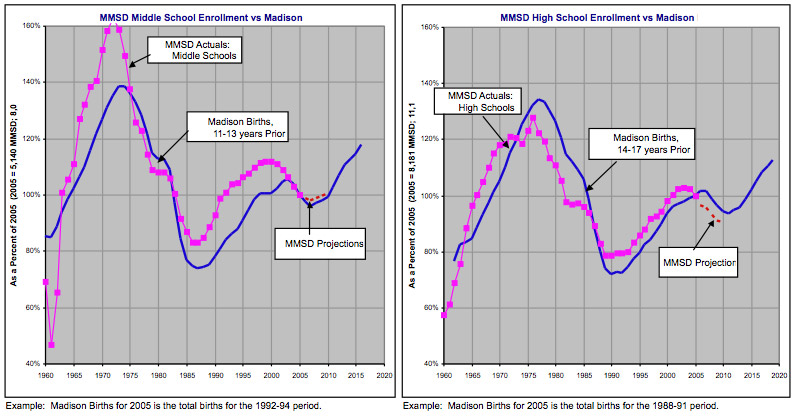 The trends described above lead to a very clear conclusion: a new school on the far west side will be required in the long term.

Delaying construction of the far west school would seem advisable if there was a potential for flat elementary school enrollment in the next 5-10 years, or if the pressures on existing structures were not already significant and showing signs of soon becoming substantially worse, or if the cost of construction might suddenly decline. But as none of these elements are evident, and other serious and contentious matters remain, delay seems distinctly unwise.

108 PDF Version of this Report.

10 thoughts on “A New School on Madison’s Far West Side: A Long Term Perspective”