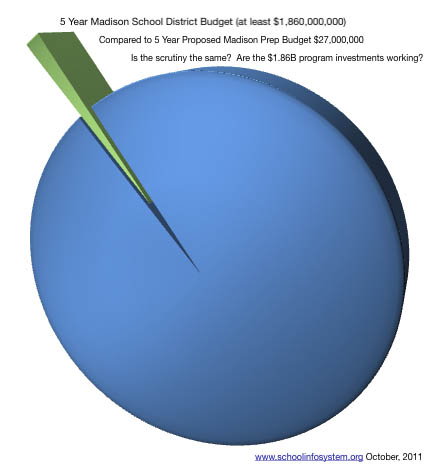 Ed Hughes has a problem.
Like most of his fellow school board members and practically everyone else in Madison, he was bowled over by Urban League president Kaleem Caire’s vision for Madison Prep, a charter school that would aggressively tackle the school district’s entrenched minority achievement gap.
“The longer day, the instructional focus, and the ‘no excuses’ approach appealed to me,” Hughes says.
But as he looked into the details, Hughes became more and more concerned about the cost of the school and “whether there is a good match between the problem we are trying to address and the solution that’s being proposed.”
Expressing those doubts in his blog has turned the soft-spoken Hughes into a heretic.
Caire is a superstar who has galvanized the community to get behind his charter school. At school board hearings, only a handful of speakers express any reservations about the idea, while an overwhelming number speak passionately about the need to break the school-to-prison pipeline, and about Madison’s moral obligation to do something for the kids who are not being served.
Hughes listens respectfully. But, he says, “for Madison Prep to be the answer, we’d need to know that the students it was serving would otherwise fall through the cracks.”
…..
But Hughes’ big problem with the Urban League’s draft proposal, submitted to the district last February, is cost. The total cost to the school district of $27 million over five years is just too much, he says.

I don’t know if the Urban League’s plans for Madison Prep will come to fruition. If they do, I predict here and now that the school will have a higher graduation rate than the Madison school district as a whole for African-American students and probably for other groups of students as well. I also predict that all or nearly all of its graduates will apply to and be admitted to college. What is impossible to predict is what difference, if any, this will make in overall educational outcomes for Madison students.
Of course charter schools like Madison Prep will have higher graduation rates than their home school districts as a whole. Students enrolled in charter schools are privileged in one clear way over students not enrolled. Each student has a parent or other caregiver sufficiently involved in the child’s education to successfully navigate the process to get the student into the charter school. Not all students in our traditional neighborhood schools have that advantage. Other things equal, students with more involved parents/caregivers will be more likely to graduate from high school. So, one would expect that charter schools will have higher graduation rates.