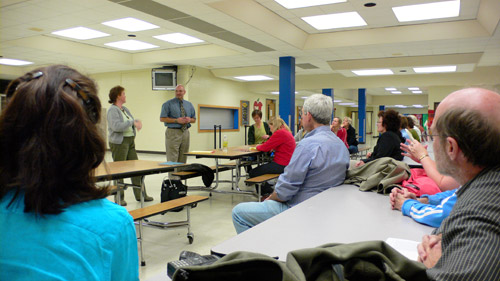 Parents, staff and community officials met Wednesday night to discuss a number of recent violent incidents at and near Madison West High School [map]
I took a few notes during the first 60 minutes:
Madison Alders Robbie Webber and Brian Solomon along with James Wheeler (Captain of Police – South District), Luis Yudice (Madison School District The Coordinator of Safety And Security), Randy Boyd (Madison Metro Security) and West Principal Ed Holmes started the meeting with a brief summary of the recent incidents along with a brief school climate discussion:
James Wheeler:

Police beat officer and Educational Resource Office (ERO) patrol during West’s lunch period.
“There have been complaints from the houses around the school” so MPD increased patrols to “make a statement last week”.
Still a relatively safe neighborhood.
3 arrests at Homecoming.
Made a drug dealing arrest recently.
People do see drug dealing going on and have reported it.
There have been additional violent incidents, especially at the Madison Metro transfer points

Behavior is atypical of what we have seen on the past . Perpetrators are new to West.
Emphasized the importance of a safe learning environment.
Make sure there are police and school consequences and that they are severe. These crimes are unacceptable and should not be tolerated.

60+ bus runs daily for the school system.
There have been some serious fights at the transfer points. Cameras are in place there.
Main problem is confidentiality due to the students age. Can track them via bus passes.
Adding DSL so that the police precinct can monitor the transfer points. Incidents are about the same as last year but the numbers are going up.
Baptist church elders have helped patrol the South Transfer Point. We are looking for more community help.

Big picture perspective:
Our community really has changed a lot within the past five years. I sense a great deal of stress within the police department.
Citywide issues
Increasing violence involving girls. He has looked at a lot of data with the District Attorney’s office. Girls are extremely angry.
Angry parents are coming into the schools.
Increasing issues in the neighborhood that end up in the schools. Mentioned South Transfer Point beating and that Principal Ed Holmes mediated the situation at an early stage.
Growing gang violence issue particularly in the east side schools. We do have gang activity at Memorial and West but most of the issues are at Lafollete and East. Dealing with this via training and building relationships
What the school are experiencing is a reflection of what is going on in the community.

Do we have weapons in school? Yes we find knives in all the schools. No guns. Unfortunate fact is that if a kid wants to get their hand on a gun, they can. They are available.

“We took away a gun once in my 18 years”.
I want to get across to the students – if they see something they have to report it. We have 2100 students and 250 staff members.

Kids are afraid of the bathrooms
Another lunch assault that has not been reported.
Incidents are much higher than we know because many incidents are not reported.

A parent asked why the District/Police did not use school ID photos to help victims find the perpetrators? Ed Holmes mentioned that District has had problems with their photo ID vendor.