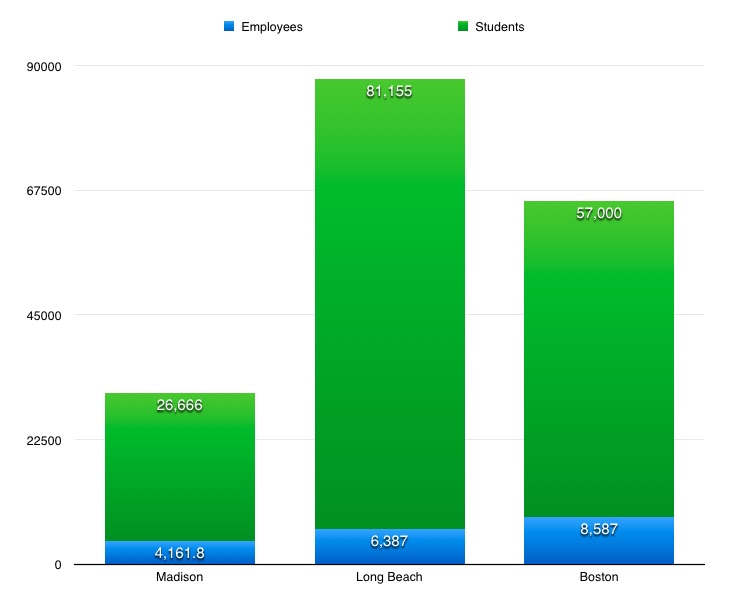 In 2013, Madison Superintendent Jennifer Cheatham said “What will be different, this time“? The Superintendent further cited Long Beach and Boston as beacons in her Rotary speech.

A focus on Adult Employment:

“Beware of legacy practices (most of what we do every day is the maintenance of the status quo), @12:40 minutes into the talk – the very public institutions intended for student learning has become focused instead on adult employment. I say that as an employee. Adult practices and attitudes have become embedded in organizational culture governed by strict regulations and union contracts that dictate most of what occurs inside schools today. Any impetus to change direction or structure is met with swift and stiff resistance. It’s as if we are stuck in a time warp keeping a 19th century school model on life support in an attempt to meet 21st century demands.” Zimman went on to discuss the Wisconsin DPI’s vigorous enforcement of teacher licensing practices and provided some unfortunate math & science teacher examples (including the “impossibility” of meeting the demand for such teachers (about 14 minutes)). He further cited exploding teacher salary, benefit and retiree costs eating instructional dollars (“Similar to GM”; “worry” about the children given this situatio

The Single Best Idea for Reforming K-12 Education; ” Stop Running the system for the sake of the system.

Dirty little secret of US ed spending: Since 1950, “US schools increased their non-teaching positions by 702%.”; Ranks #2 in world on non teacher staff spending.

“Reverting to the mean“.