It would be easy for labor supporterse to write the story of Wisconsin’s current union landscape as a tragedy. In this version of events, the bomb that Republican Gov. Scott Walker and his allies dropped on the state’s public sector unions has worked just as intended: The ranks of the unions have thinned; their coffers are depleted; their influence over the state and its legislative priorities has been reduced to where, in 2017, the state teachers’ union no longer employed a lobbyist at the statehouse.

All of this is true.

But there is another, more hopeful story to be told about Wisconsin, seven years after Walker officially kicked off his war on labor. It involves parents and teachers and local grassroots activists coming together to fight for the public schools in their communities. While Walker and the Republicans who control Wisconsin’s legislature got their way in 2011, there is a robust ongoing debate, throughout the state, about the role of public education and who should pay for it. 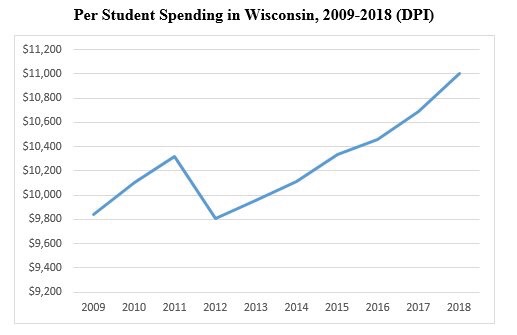 Another perspective.Locally, Madison spends far more than most districts, yet we have long tolerated disastrous reading results.