Madison Teachers, Inc., the Madison teachers’ union, has recently ratified its collective bargaining agreement with the Madison school district for 2005-06 and 2006-07. Later this month, the Board of Education will have its chance to ratify the agreement, although the board gave preliminary assent on June 6.
On June 10, Isthmus writer Jason Shepard provided an excellent analysis of the ways that providing Wisconsin Physicians Service (WPS) to the teachers drives up the cost of each contract. The article also questions the relative quality of the WPS coverage. See “District ties to WPS prove costly”, available at many locations in Dane County.
The following graphs, based on data from MMSD, illustrate the impact of high cost WPS coverage on the cost of the two-year contract and the extent to which access to WPS coverage for roughly half of the teachers receiving health insurance through MMSD erodes wage gains. 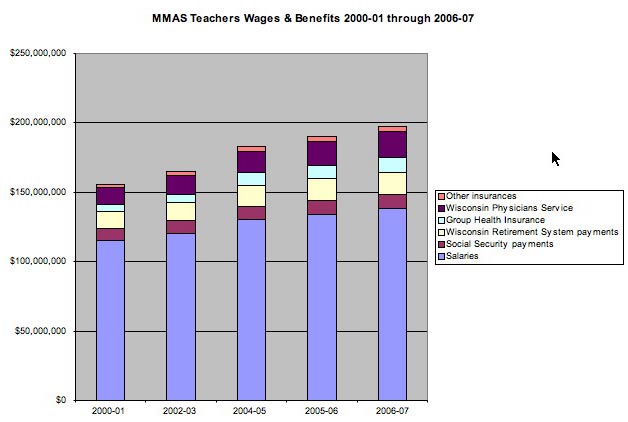 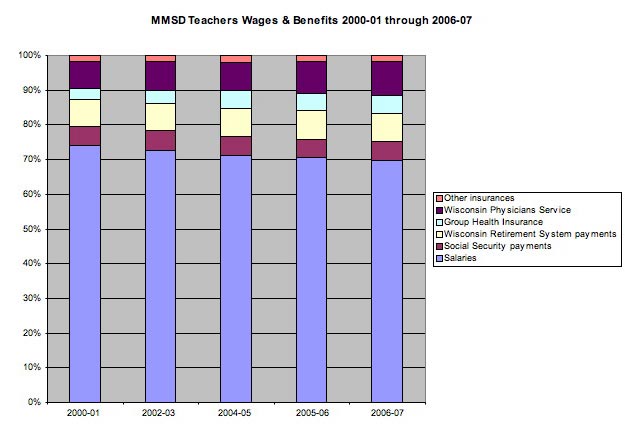 Graph 2 demonstrates the impact of the cost of fringe benefits, including WPS, on teacher wages. Between 2000-01 and 2006-07, wages as a percentage of total compensation drop from 74% to 70 percent.
Clearly, the Board of Education must pursue similar health insurance coverage at lower costs for its teachers and other MTI-represented employees. There are millions of dollars at stake and every dollar not saved is another unnecessary staff or program cut. Unfortunately, the contract for 2005-07 continues WPS for the teachers. If the parties agree to make a shift away from WPS during the term of the agreement–a possibility that could come from the new joint task force on health insurance–the savings will go to the wage scale, rather than to reinstating positions and restoring programs, unless MTI agrees to give the savings back to the district. What seems likely as the result of a shift from WPS is a multi-million dollar windfall for teachers in the form of higher wages. Higher wages, of course, drive other costs up, such as Wisconsin Retirement System and Social Security payments. In turn, higher wages going into the 2007-09 contract will force more teacher reductions.