On March 28, the Madison School Board will cast the final vote on the proposed referendum for $14.5M to build a second school on the Leopold Elementary School site. The proposed “paired” school will open its doors to students in September of 2007 and will house up to 550 Kindergarten through second grade students and another 550 third through fifth grade students. If the Leopold community’s current population mix holds, a school of 1100 or more will include 275 (25%) students for whom English is a second language and 121 (11%) who have Special Educational needs. Over half of the students will come from low income homes. Unlike other Madison paired schools that are on different sites, Leopold’s buildings will be on the same grounds and will be physically linked in an L-shape. Students from both schools will share lunch rooms and playground facilities. Students will have separate entrances, but will share buses to and from school.
My duty as a board member is to weigh the pros and cons of this recommendation from the administration. Although I see why current Leopold parents expect great positives from the new building, I believe that these are short-term gains for the school and community and that the negatives of creating an extremely large elementary school may outweigh the short-term advantages. I am particularly concerned that the short-term relief for overcrowding will be undermined when the building reaches full capacity and houses two schools, each of which is far bigger than any K-2 or 3-5 school today. It is my responsibility to ask whether we have the experience to make such a joint school work and what additional resources will be required to assure student success under such conditions.

In the short-term, the proposal meets some, but not all, of the needs of Leopold’s current students. It would end the overcrowding. Because it would open at 75% of capacity, the students at the school in 2007 would have small classes in an over-sized facility. On the other hand, the school could not open until the fall of 2007. In the interim there must be a plan to control enrollment size through such means as freezing enrollment, sending grades to other schools or changing school boundaries. So far the Board has not seen the interim plan.
In the long-term, it is difficult to imagine ways in which a very large paired school offers new educational benefits to our children, but easy to list the problems that likely will arise from turning away from our goal of keeping schools small. Madison’s standard is consistent with national trends for school size which prefer small over large schools. Research and our experience link smaller schools with higher academic achievement (especially for low income children), more engagement in school activities by students and families, and less truancy, discipline problems and need for Special Education services.
The Madison school district has remained true to this standard, even during difficult economic times. Currently, our largest elementary school–after Leopold-is Chavez School. Enrollment there is capped at 650. The biggest paired school is Franklin-Randall at 716 students. Even our largest middle school, Hamilton, has only 705 students. At the middle and high schools, we are working hard to break the schools into “smaller learning communities”. Nationally, millions and millions of dollars are going into reducing the size of schools at all grade levels for the sake of improving the academic achievement of low income and minority students.
I greatly regret that I underestimated the need to focus on the educational dimension of the question before us from the very beginning. I realize that it is late in the game to raise such questions. However, I learned a painful lesson when I did not question or oppose the Board’s decision to go ahead with construction of Chavez Elementary School, despite our doubts about the general contractor for the project. The scenario was similar. We had overcrowding problems on the west side and urgently needed a solution. We voted yes to move the project ahead. The result was a poor construction job and a new school that opened and, within a few months, closed again due to serious problems. Despite our good intentions, our rush to resolve one problem created a new problem and disrupted the children, families and staff of seven schools for most of a school year.
Although my thinking disappoints proponents of a new building, I do not believe that I will have fulfilled my responsibilities if I fail to raise the issue. It is possible that the current proposal for an 1100 student school will prove to be educationally sound. However, it is my goal to avoid creating additional problems for the Leopold community by thoroughly discussing plans before, rather than after, they are implemented. 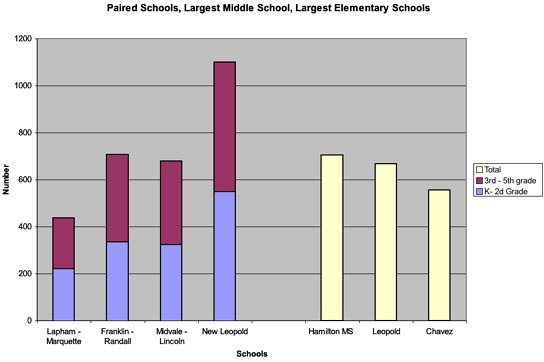 This chart is based on the student enrollment data for the Madison Metropolitan School District after the 3rd Friday in September of 2004. All paired schools except the proposed new Leopold School are located on different sites.