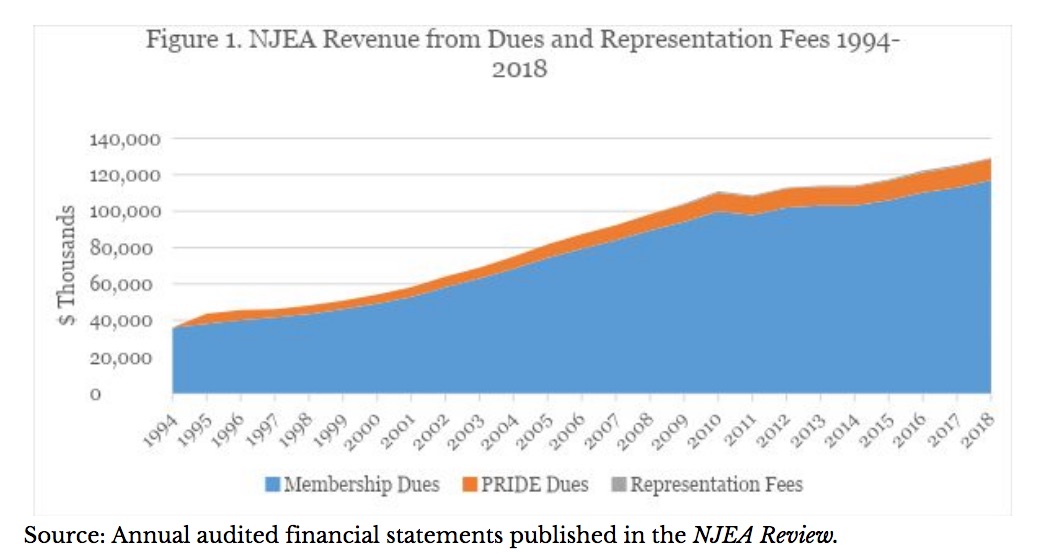 The NJEA Gains Laws That Secure Taxpayer Funding With great deliberation and persistence over many years, the NJEA used its political clout to construct a funding system that funnels taxpayer dollars directly into its coffers. This expertly designed legislative regime had three1pillars: exclusive bargaining authority, agency fees and the automaticwithholding of teachers’ dues. The legislature passed each of these laws after prolonged NJEA lobbying.

Per legislation passed in the 1960s, the NJEA established itself as the exclusive representative of teachers and was empowered to collectively bargain with local school boards, which were bound by law to negotiate in good faith. The NJEA also gained “dues check-off:” the right to have teachers’ dues deducted from their paychecks automatically (after first gaining teachers’ permission). Property taxes pay teacher salaries, so dues withholding meant that teachers and school districts effectively became pass-throughs for property tax dollars to flow directly to the NJEA. The teachers never saw the money.

Finally, in 1979, after many years of lobbying, the NJEA won the right to charge a teacher “agency fees” even if the teacher did not belong to the union. Such fees amounted to as much as 85% of regular dues, sopredictably fewer than 1% of teachers opted not to join the union. This law ensured that the NJEA had an enormous base of members from which to withhold dues.

Thanks to this legislative regime, the school district essentially acts as the bill collector for a private, special interest – all on the taxpayers’ dime.In the decades since its enactment and up until 2018, this funding system worked extremely well for the NJEA.

Dues check-off and agency feescombined to provide the NJEA with an automatic and substantial annualstream of tens of millions of property tax dollars. From 1994-2018, theNJEA brought in a total of $2.11 billion, reaching a record high of $129 million in 2018.