Also *ahem*. A good number of us had been objecting and pointing out the broader harms of the interaction between Facebook’s business model and politics even when it appeared to benefit Obama/Democrats. 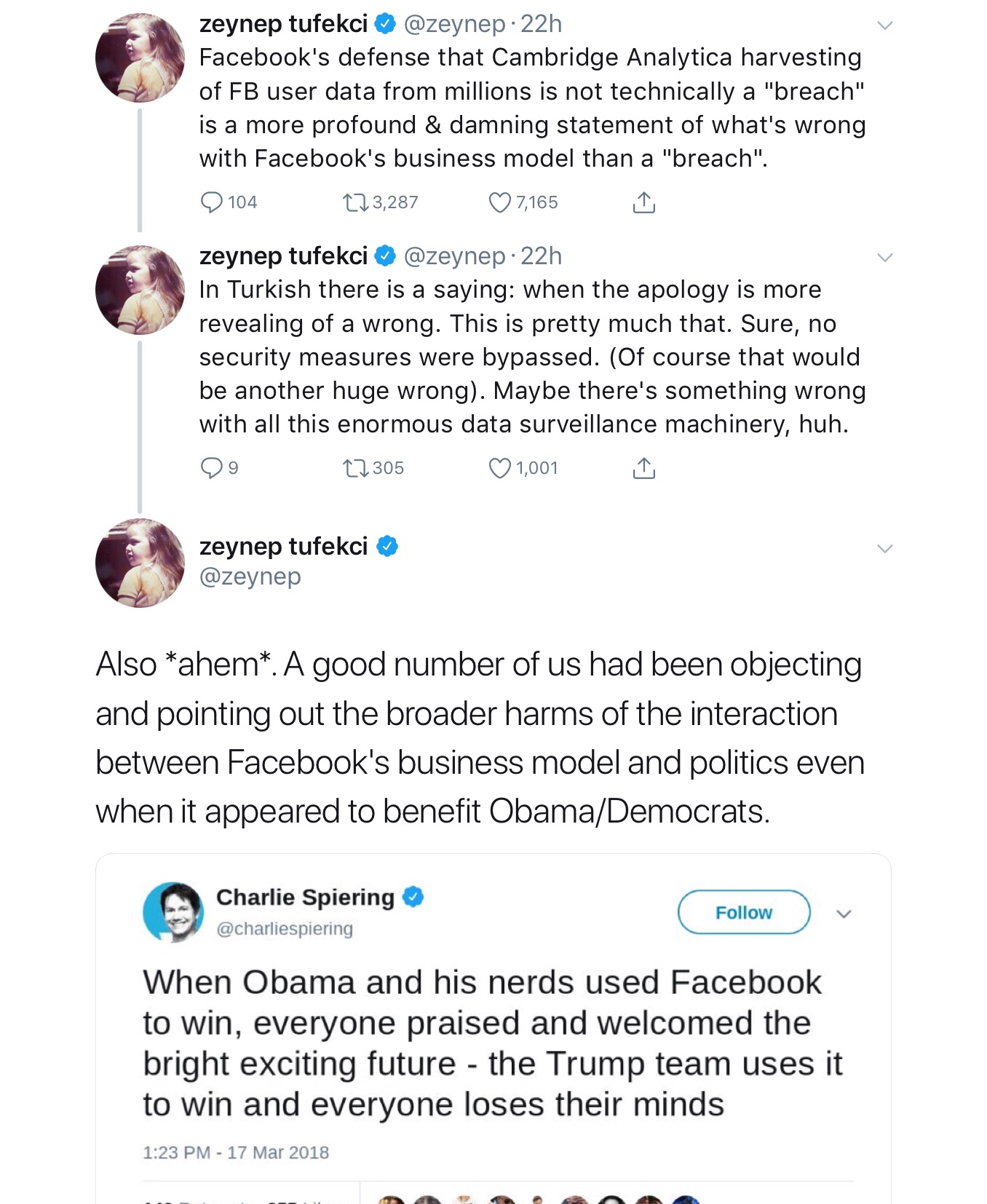 Dan Ball (2013): How the Obama campaign won the race for voter data.

Ex-Obama Campaign Director Drops Bombshell Claim on Facebook: ‘They Were on Our Side’:

A former Obama campaign official is claiming that Facebook knowingly allowed them to mine massive amounts of Facebook data — more than they would’ve allowed someone else to do — because they were supportive of the campaign.

In a Sunday tweet thread, Carol Davidsen, former director of integration and media analytics for Obama for America, said the 2012 campaign led Facebook to “suck out the whole social graph” and target potential voters. They would then use that data to do things like append their email lists.

Friended: How the Obama Campaign Connected with Young Voters:

That’s because the more than 1 million Obama backers who signed up for the app gave the campaign permission to look at their Facebook friend lists. In an instant, the campaign had a way to see the hidden young voters. Roughly 85% of those without a listed phone number could be found in the uploaded friend lists. What’s more, Facebook offered an ideal way to reach them. “People don’t trust campaigns. They don’t even trust media organizations,” says Goff. “Who do they trust? Their friends.”

Fake News and Bots May Be Worrisome, but Their Political Power Is Overblown: Brendan Nyhan.

Yep. Facebook non-users get profiled, too. This is our online infrastructure: dossiers are accumulated whatever you do.

In the 2008 presidential election, Obama’s targeters had assigned every voter in the country a pair of scores based on the probability that the individual would perform two distinct actions that mattered to the campaign: casting a ballot and supporting Obama. These scores were derived from an unprecedented volume of ongoing survey work. For each battleground state every week, the campaign’s call centers conducted 5,000 to 10,000 so-called short-form interviews that quickly gauged a voter’s preferences, and 1,000 interviews in a long-form version that was more like a traditional poll. To derive individual-level predictions, algorithms trawled for patterns between these opinions and the data points the campaign had assembled for every voter—as many as one thousand variables each, drawn from voter registration records, consumer data warehouses, and past campaign contacts.

The Flight of the Zuckerberg:

“Barack Obama was the one that made data targeting in political advertising cool. When he did it, people said he was smart. Now, we’re pissed off at Cambridge Analytica for doing the same thing because Donald Trump got elected.”

“Governments have been trying to find agencies that can do what Cambridge Analytica did for Donald Trump for years. There have been briefs in the past from both Labour and Conservative [political parties] saying, ‘Can you help us win an election?’ I’ve seen them, so the governments have known what’s possible.”

The long term Madison K-12 reading disaster has a very steep price, far beyond our $20,000 per student annual expenditures.