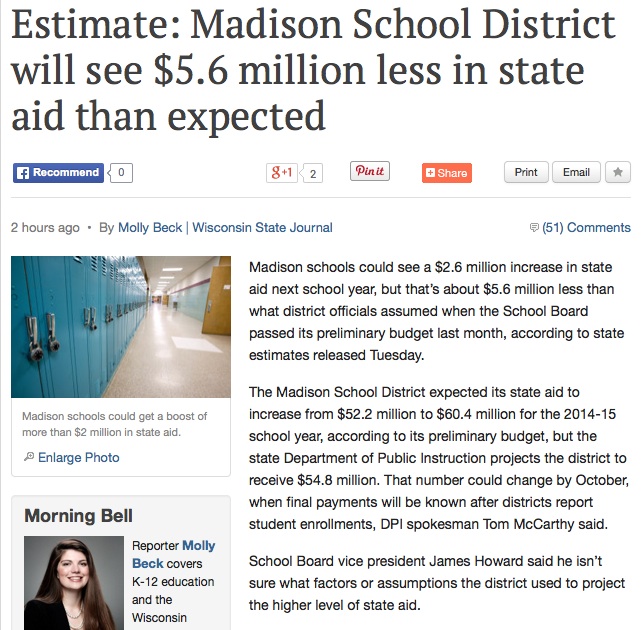 Madison schools could see a $2.6 million increase in state aid next school year, but that’s about $5.6 million less than what district officials assumed when the School Board passed its preliminary budget last month, according to state estimates released Tuesday.

The Madison School District expected its state aid to increase from $52.2 million to $60.4 million for the 2014-15 school year, according to its preliminary budget, but the state Department of Public Instruction projects the district to receive $54.8 million. That number could change by October, when final payments will be known after districts report student enrollments, DPI spokesman Tom McCarthy said.

School Board vice president James Howard said he isn’t sure what factors or assumptions the district used to project the higher level of state aid.

“That’s a very good question, and that’s one we’ll all be looking for an answer for,” said Howard. “If the preliminary budget is based on that $60 million state aid estimate, then that’s going to be an issue.” 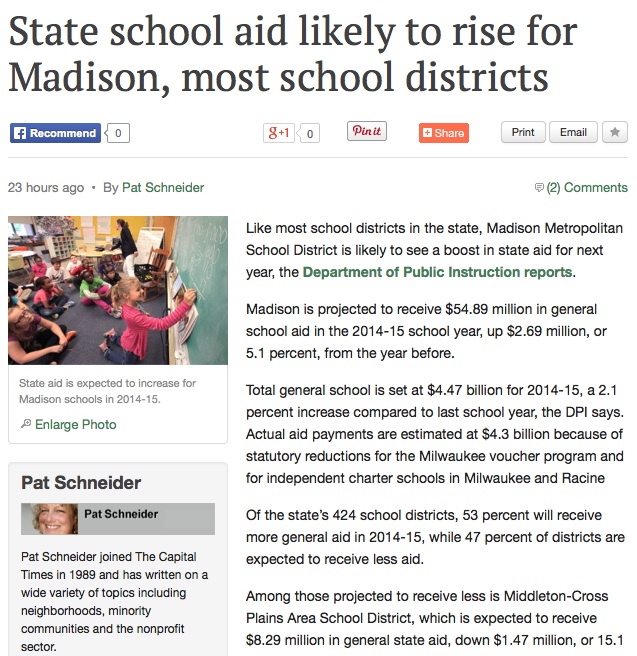 Like most school districts in the state, Madison Metropolitan School District is likely to see a boost in state aid for next year, the Department of Public Instruction reports.

Total general school is set at $4.47 billion for 2014-15, a 2.1 percent increase compared to last school year, the DPI says. Actual aid payments are estimated at $4.3 billion because of statutory reductions for the Milwaukee voucher program and for independent charter schools in Milwaukee and Racine

Of the state’s 424 school districts, 53 percent will receive more general aid in 2014-15, while 47 percent of districts are expected to receive less aid.

Among those projected to receive less is Middleton-Cross Plains Area School District, which is expected to receive $8.29 million in general state aid, down $1.47 million, or 15.1 percent, from the year before.