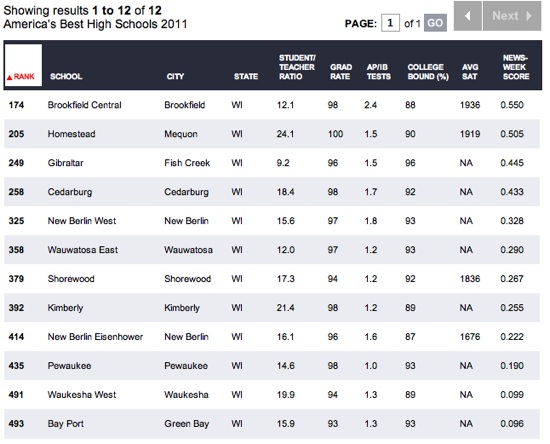 To compile the 2011 list of the top high schools in America, NEWSWEEK reached out to administrators, principals, guidance counselors, and Advanced Placement/International Baccalaureate coordinators at more than 10,000 public high schools across the country. In order to be considered for our list, each school had to complete a survey requesting specific data from the 2009-2010 academic year. In total, more than 1,100 schools were assessed to produce the final list of the top 500 high schools.
We ranked all respondents based on the following self-reported statistics, listed with their corresponding weight in our final calculation:
Four-year, on-time graduation rate (25%): Based on the standards set forth by the National Governors Association, this is calculated by dividing the number of graduates in 2010 by the number of 9th graders 2006 plus transfers in minus transfers out. Unlike other formulas, this does not count students who took longer than four years to complete high school.
Percent of 2010 graduates who enrolled immediately in college (25%): This metric excludes students who did not enroll due to lack of acceptance or gap year.
AP/IB/AICE tests per graduate (25%): This metric is designed to measure the degree to which each school is challenging its students with college-level examinations. It consists of the total number of AP, IB, and AICE tests given in 2010, divided by the number of graduating seniors in order to normalize by school size. AP exams taken by students who also took an IB exam in the same subject area were subtracted from the total.
Average SAT and/or ACT score (10%)
Average AP/IB/AICE exam score (10%)
AP/IB/AICE courses offered per graduate (5%): This metric assesses the depth of college-level curriculum offered.  The number of courses was divided by the number of graduates in order to normalize by school size.

One thought on “Best American High Schools; Wisconsin: 12 out of 500, None from Dane County”