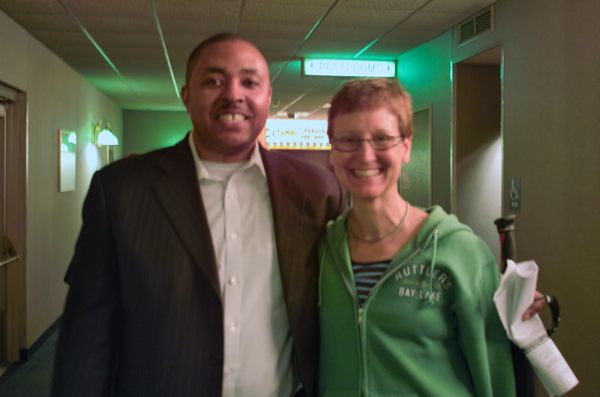 Things have changed since Caire was raised by an aunt across the street from Penn Park at a time when adults didn’t hesitate to scold neighborhood kids who got out of line, and parents took on second jobs to make ends meet. Today, there is more “hard core” poverty, more crime, and much less sense of place, says Caire, who still can recite which families lived up Fisher Street and down Taft.
The supportive community of his boyhood began disappearing in the 1980s, as young parents moved in from Chicago to escape poverty and could not find the training and jobs they needed, Caire says. People started to lose their way. In a speech this month to the Madison Downtown Rotary, Caire said he has counted 56 black males he knew growing up that ended up incarcerated. “Most of ’em, you would never have seen it coming.”
Caire, once a consultant on minority education for the state and advocate for voucher schools, left Madison a decade ago and worked with such national nonprofit organizations as the Black Alliance for Educational Options and Fight for Children. Later he worked for discount retailer Target Corp., where he was a fast-rising executive, he says, until he realized his heart wasn’t in capitalism, despite the excellent managerial mentoring he received.
The sense of community that nurtured his youth has disappeared in cities across the country, Caire remarks. So he’s not trying to recreate the South Madison of the past, but rather to build connections that will ground people from throughout Madison in the community and inform the Urban League’s programs.

Caire recently attended the Madison Premiere of “The Lottery“, a film which highlights the battle between bureaucratic school districts, teacher unions and students (and parents).