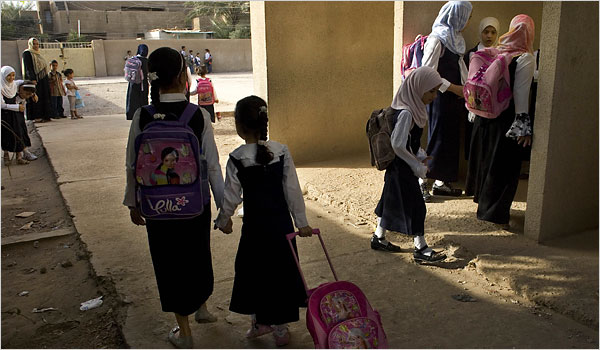 Sam Dagher in Baghdad via a Dexter Filkins email:

On the first day of school, 10-year-old Basma Osama looked uneasy standing in formation under an already stifling morning sun. She and dozens of schoolmates listened to a teacher’s pep talk — probably a necessary one, given the barren and garbage-strewn playground.
“Security has returned to Baghdad, city of peace and land of pan-Arabism,” the teacher told the students, many as young as 5, who were loaded down with bright backpacks.
Basma’s mother, Hind Majid, who had just returned with her two daughters after a year in Egypt waiting out Iraq’s uncertainties, was not yet convinced about the security part.
“I am still fearful of the situation,” she said. “I have taken a gamble with my return to Iraq.”
It was certainly not the gamble it would have been a year ago, as calm has settled over ever-larger areas of Iraq. But still there are many reasons for worry: Only a few hours after Basma arrived, the school was evacuated when Iraqi commandos stormed in and warned that two women were planning suicide bombing attacks on schools in the area.
The first day of school feels like a fresh start everywhere, and Iraq’s six million schoolchildren returned to much more hope and far less violence this year.

Filkins covered Iraq for a number of years and has recently written an excellent book: “The Forever War“.