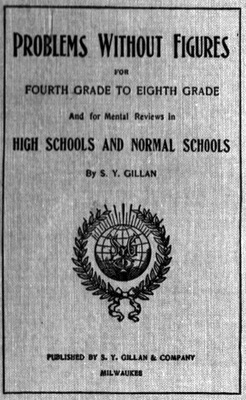 Arithmetic can be so taught as to make the pupil familiar with thc fact that we may use a number in a problem without knowing what particular number it is. Some of the fundamentals of algebra may thus be taught along with arithmetic. But, as a rule, whenever any attempt is made to do this the work soon develops or degenerates into formal algebra, with a full quota of symbolism, generalization and formulae — matter which is not wholesome pabulum for a child’s mind and the result has been that teachers have given up the effort and have returned to the use of standardized knowledge put up in separate packages like baled hay, one bale labeled “arithmetic,” another “algebra,” etc.
Every problem in arithmetic calls for two distinct and widely different kinds of work: first, the solution, which involves a comprehension of the conditions of the problem and their relation to one another; second, the operation. First we
decide what to do; this requires reasoning. Then we do the work; this is a merely mechanical process, and the more mechanical the better. A calculating machine, too stupid to make a mistake, will do the work more accurately than a
skillful accountant. Adding, subtracting, multiplying and dividing do not train the power to reason, but deciding in a given set of conditions which of these operations to use and why, is the feature of arithmetic which requires reasoning.
The problems offered here will furnish material to promote thinking; and a few minutes daily used in this kind of work will greatly strengthen the pupils’ power to deal with the problems given in the textbook.
After consultation with teachers, the author decided to print the problems without regard to classification. They range all the way from very simple work suitable for beginners up to a standard adapted to the needs of eighth grade pupils. As a review in high school and normal school classes the problems may be taken in order as they come, and will be found Interesting and stimulating. For pupils in the grades, the teacher will Indicate which ones to omit; this discrimination will be a valuable exercise for the teacher.
A few “catch problems” are put in to entrap the unwary. To stumble occasionally into a pitfall makes a pupil more watchful of his steps and gives invigorating exercise in regaining his footing. The groove runner thus learns to use his wits and see the difference between a legitimate problem and an absurdity.
It is recommended that these exercises be used as sight work, the pupils having the book in hand and the teacher designating the problems to be solved without previous preparation.
S. Y. GILLAN.
Milwaukee, Wisconsin, May 21, 1910.

Many thanks to Dick Askey for providing a copy (the!) of this book.
From the book:

To answer in good, concise English, affords an excellent drill in clear thinking and accurate expression. This one is suitable for high school, normal school and university students, some of whom will flounder in a most ludicrous fashion when they first attempt to give a clear-cut answer conforming to the demands of mathematics and good English.
224. After a certain battle the surgeon sawed off several wagon loads of legs. If you are told the number of legs in each load and the .price of a cork leg, how can you find the expense of supplying these men with artificial legs? Writeout a list of twenty other expense items incurred in the fighting of a battle.
225. The American people spend each year for war much more than for education. If you know the total amount spent for each purpose, how can you find the per capita expense for war and for schools?
227. A boy travels from Boston to Seattle in a week. Every day at noon he meets a mail train going east on which he mails a letter to his mother in Boston. If there is no delay, how frequently should she receive his letters?