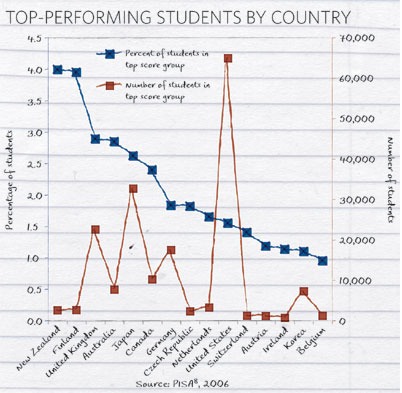 The future educational path for the United States should come from looking within the country rather than lionizing faraway test-score champions. Our analysis3 of the data suggests two fundamental problems that require different approaches. First, pedagogies must address science literacy for the large numbers of low-performing students. Second, education policy for our highest-performing students needs to meet actual labour-market demand.
In the United States, a decade’s worth of international test rankings based on slender measures of academic achievement in science and maths have been stretched far beyond their usefulness. Perhaps policy-makers feel it is better to motivate policy by pointing to high-scoring Czechs with fear, instead of noting our high-scoring Minnesotans as examples to emulate. But looking within the United States may be the best way to learn about effective education. As the PISA authors emphasize in their report, 90% of the variance in the scores is within countries rather than between countries. Therefore, most of what one can learn about high performance is due to the variation in factors within the nation’s borders. It would seem far more effective to transfer best practices across city and state lines than over oceans.