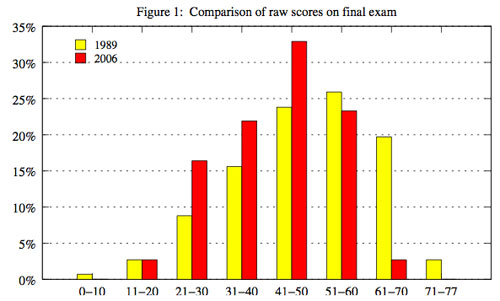 Professors are constantly asked if their students are better or worse today than in the past. This paper answers that question for one group of students.
For my fall 2006 Calculus I for the Biological and Social Sciences course I administered the same final exam used for the course in the fall of 1989. The SAT mathematics (SATM) scores of the two classes were nearly identical and the classes were approximately the same percentage of the Arts and Sciences freshmen. The 2006 class had significantly lower exam scores.
This is not a traditional research study in mathematics education. The value of this study is probably in the rarity of the data, which compares one generation to another.
….
Nineteen eighty-nine is, in mathematics education, indelibly tied to the National Council of Teachers of Mathematics’ publication, Curriculum and Evaluation Standards for School Mathematics (1989), which downplayed pencil and paper computations and strongly suggested that calculators play an important role in K-12 mathematics education. My 2006 students would have been about two years old at the time of this very influential publication, and it could easily have affected the mathematical education many of them received. Certainly, one possibility is that mathematics preparation is down across the country, thus limiting the pool of well prepared college applicants.

Wilson is a Professor of Mathematics at Johns Hopkins University.