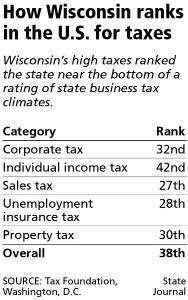 The first step toward improving the state’s tax climate must be for lawmakers to control spending. The state cannot afford to cut taxes and thus forgo revenue unless the next governor and Legislature do a better job of paring, consolidating and conserving.
Even the promise that lower taxes will generate more business development in the future will not address the immediate strains created by rising costs for Medicaid and other programs.

Globally, American companies already are at a disadvantage because the benchmark federal corporate tax rate is 35%, which the Tax Foundation notes is “one of the highest corporate tax rates of any of the industrialized economies” – even after the successive rounds of tax reductions under President Bush.
The foundation’s report, however, only added to a bewildering array of national tax rankings, each using different methodologies that have sparked a lively debate among policy-makers.
The foundation’s annual State Business Tax Climate Index is based on a weighted index that ranks each state’s corporate taxes, individual income taxes, sales taxes, unemployment taxes and property taxes. While it relies on U.S. census data for each state’s property tax, it compares state tax rates and tax laws to measure the other four. It employs a matrix of 10 subindexes and 113 variables.
The Madison-based Wisconsin Taxpayers Alliance, using the latest available census numbers, put Wisconsin at No. 6 when measured as a percentage of personal income. That figure represents years of incremental improvements after Wisconsin registered No. 3 in the nation under the same measures in 1994.

Taxes, particularly the much discussed property tax “Freeze” will certainly be on voter’s minds November 7, 2006. The Madison School District’s 06/07 budget will grow local property taxes by 11,626,677 to $211,989,932 (5.8%) [See 2006/2007 Budget Executive Summary – PDF]. Gotta love politics, 5.8% is certainly not a freeze :). The Madison School District’s property tax levy changes over the past 6 years. The mill rate has not changed at the same rate as the levy increases because local assessed values have been increasing. That will probably change now as the housing market takes a breather.