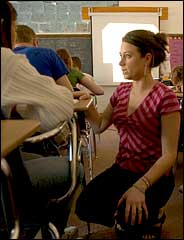 Denver is the first major city to approve a salary structure that rewards teachers for the progress of their students, according to this article by Diana Jean Schemo.

As a teacher of emotionally disturbed children, Jeremy Abshire sets goals for each of his students. Geronimo, 14, an American Indian who knew only the letters for “Jerry,” will read and write, and sign his true name. Shaneesa, a meek 12-year-old reading at a first-grade level, will catch up to her middle-school peers and attend regular classes in the fall.
Under a proposal approved by teachers here and to be considered by voters next year, if Mr. Abshire’s students reach the goals he sets, his salary will grow. But if his classroom becomes a mere holding tank, his salary, too, will stagnate.
“The bottom line is, do you reward teachers for just sitting here and sticking it out, or for doing something?” said Mr. Abshire, who has been teaching for four years. “The free market doesn’t handle things that way, so why should it be any different here?”
In March, Denver’s teachers became the first in a major city to approve, by a 59 percent majority, a full-scale overhaul of the salary structure to allow “pay for performance,” a controversial approach that rewards teachers for the progress of their students.
At a time when more and more superintendents are supporting moves away from the traditional salary structure for teachers, and finding their efforts stymied in an atmosphere of suspicion and financial austerity, Denver teachers’ vote is a major breakthrough.