A few weeks ago, Madison school board member Johnny Winston Jr. circulated a message that urged readers to support community organizations that had submitted grant proposals for funding under the district's Community Service Fund (Fund 80). His message began:

"We have a great opportunity! On Monday March 6th, the Madison School Board will be considering four proposals for funding that have an opportunity to have a positive impact on the student achievement in our school district. These programs are community based after school and summer programming that can supplement students' academic achievement in the Madison Metropolitan School District. These programs are not subject to the state imposed revenue limits." (emphasis added)

After describing the programs that he proposes to fund, Mr. Winston portrays the issue as whether one is for or against community programs that enhance student achievement. At a minimum, he frames the issue to suggest that one cannot support school-community partnerships and question the district's Community Service Fund (Fund 80), when he writes:

"Please be aware that the school board and district are under attack from people who believe that programs such as these are "driving up their taxes." This is simply not true! Community services funding is included in this year's community services budget, but hasn't been allocated."

Contrary to Mr. Winston's assertions, it is very possible to support the intent of the proposed grants and still have serious reservations about Fund 80 and its uses. Indeed, the grants and services that he describes make up only a small portion of the annual expenditures from this source. Whether or not the proposals are approved is less important than the much-needed public discussion of how the Madison school district is using its Fund 80 resources and whether taxpayers agree that those uses are worth the increase in their property taxes. With projected growth from $5.4 million 2001-2002 to over $16 million in 2011, most of it from property taxes, it is our elected representatives' responsibility to engage the community in discussion to approve or reject the board's uses of this fund.

District administrators and members of the school board often portray the Community Service Fund as a way for the district to enhance ties to key community partners in support of student achievement. In reality, those partners receive a very small portion the Fund 80 budget. The lion's share of Fund 80 resources go to Madison School Community Recreation programs, and to MSCR administrative and personnel costs in particular. 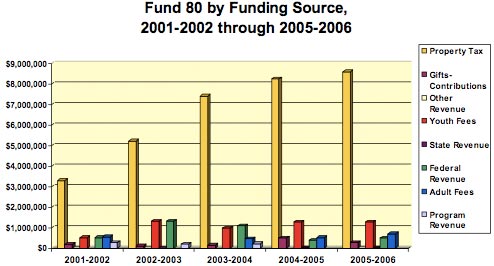 The size of Fund 80 and its uses do not fall under the revenue cap. This gives the district a great deal of flexibility, but it also makes it possible to achieve the sort of rapid growth seen above without public discussion of the purposes of the fund or where it fits in district priorities.

Consultants working for the Madison School District recently projected growth in Fund 80 at a rate of over 6% per year - a rate higher than the annual rate of inflation. These projections place Fund 80 at over $16 million in 2011. Without a public discussion of the Community Service Fund and its role in Madison's public school priorities, it is difficult to explain why the fund has grown so much in the past five years, or would continue to grow so fast over the next five years. 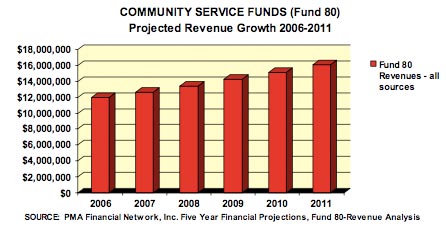 How will Madison pay for Fund 80's growth from a total budget of $5.4 million to over $16 million in one decade?

The consultant's projections don't shed much light since the funds are described as local revenue or federal revenue, without distinction with in categories. The pie chart, however, gives us a sense of what we can expect: local revenue sources will bear the burden of this expansion. And, since federal revenues are projected at the same level each year from 2006-2011, local revenues will account for all of the fund's increase in the coming years.

And, if we look at the sources of "local revenue," it is immediately apparent that we are talking primarily about property taxes and youth fees.

It is time for residents of the Madison Metropolitan School District to have a very public conversation about how and why we use the Community Service Fund.

The magnitude of the growth and its impact on both property taxes and family resources. Past efforts to create greater scrutiny of the fund, and to have the board pass a separate Fund 80 budget. each year were defeated by the board majority. At a time when we are talking about cutting social workers and calling for referenda to balance the budget, the growth in this fund bears explanation, discussion, and public approval at a minimum.

Budget figures used in this analysis are taken from:

Authorized and paid for by Mathiak for School Board, Barbara Schrank Treasurer, 716 Orton Ct., Madison, WI 53703.