In 2013, Madison Superintendent Jennifer Cheatham said “What will be different, this time“? The Superintendent further cited Long Beach and Boston as beacons in her Rotary speech. However, based on recently released 2015-2016 budget slides (PDF) and Molly Beck’s summary, it appears that the same service, status quo governance model continues, unabated. A focus on … END_OF_DOCUMENT_TOKEN_TO_BE_REPLACED 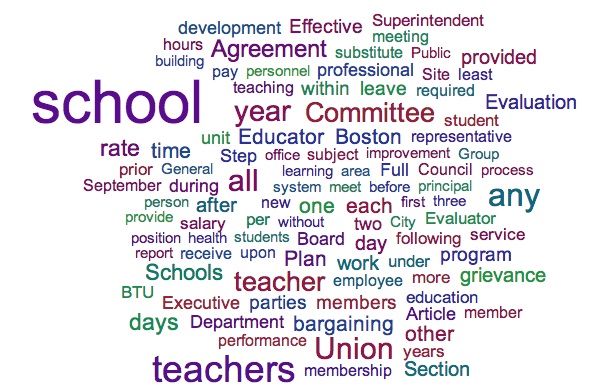 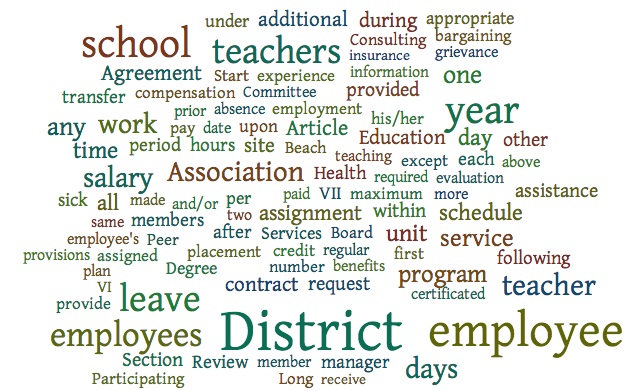 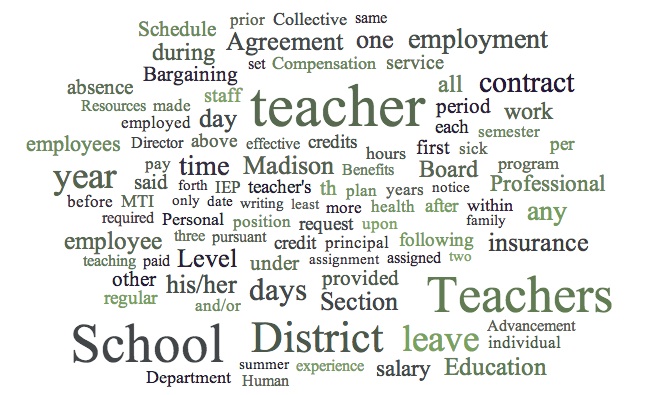 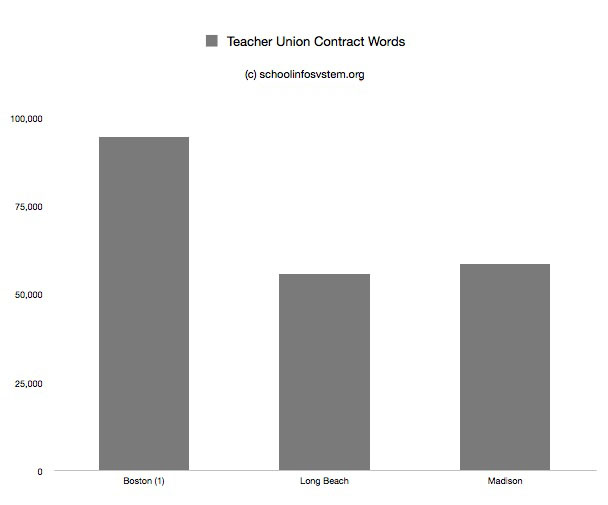 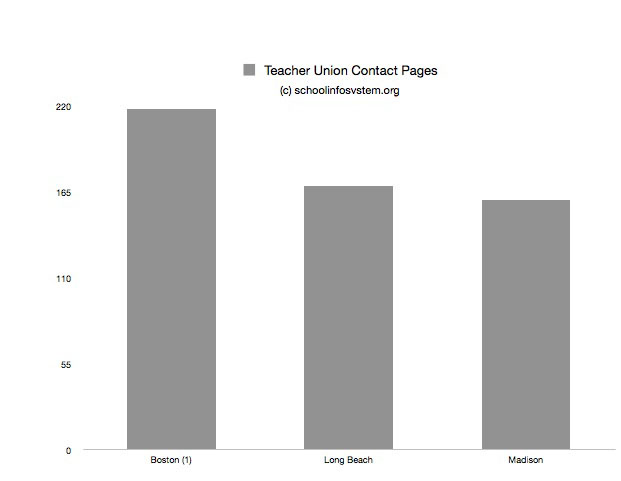 Madison Superintendent Jennifer Cheatham recently cited the Boston and Long Beach Schools for “narrowing their achievement gap” during a July, 2013 “What Will be Different This Time” presentation to the Madison Rotary Club.
As time permits, I intend to post comparisons between the Districts, starting today.
Student / Teacher Ratio 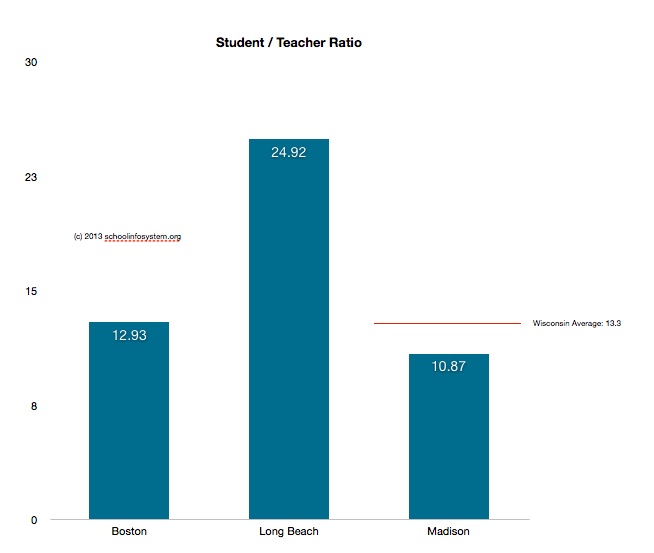 Boston Schools’ budget information was, by far the easiest to find. Total spending is mentioned prominently, rather than buried in a mountain of numbers.
Finally, after I noticed that Madison’s student / teacher ratio is significantly lower than Boston, Long Beach and the Badger state average, I took a look at the Wisconsin DPI website to see how staffing has changed over the past few years. Madison’s licensed staff grew from 2,273 in 2007-2008 to 2,492 in 2011-2012.
What are the student achievement benefits of Madison’s very low ratio?
Related: Madison Schools’ 2013-2014 budget includes a 4.5% property tax increase after 9% two years ago.
“Plenty of resources” and “the Madison School District has the resources to close the achievement gap“.

Infographic, via a kind reader email:

After two years of operation, we are setting a new level of academic and behavioral expectations for our nearly 500 students. Today, our school environment promotes an atmosphere of rigor and joy and leads students to internalize important, positive lifelong values. We are proud of the progress that we have made, as we have many achievements to celebrate.
While we are excited about the work of our students and teachers in year two, we are poised to move from a turnaround school to a truly excellent school. Our mission is still alive: We will work with urgency until all of our students acquire the knowledge, skills and strength of character necessary to succeed on the path to college and to achieve their full potential. The 2013-2014 school year will be an extraordinary and critical one for our school community, as UP Academy aspires to do whatever it takes to create responsible and independent scholars.

mp3 audio – Machine Transcript follows [Better transcript, via a kind reader PDF]: I’m Carousel Baird and we have a fabulous and exciting show lined up today. Such a fabulous guy sitting right across from me right here in the studio. Is Madison metropolitan school district current superintendent? She still here in charge of all … END_OF_DOCUMENT_TOKEN_TO_BE_REPLACED

The Madison School District is considering another property tax increase referendum for the upcoming November election. We’ve long spent more than most districts (“plenty of resources”), despite challenging academic outcomes. I thought it might be useful to revisit the choices homeowners and parents make. I’ve compared two properties, one in Middleton (2015 assessment: $257,500.00) and … END_OF_DOCUMENT_TOKEN_TO_BE_REPLACED

Wisconsin’s stürm and drang over “Act 10” is somewhat manifested in Madison. Madison’s government schools are the only Wisconsin District, via extensive litigation, to still have a collective bargaining agreement with a teacher union, in this case, Madison Teachers, Inc. The Madison School Board and Administration are working with the local teachers union on a … END_OF_DOCUMENT_TOKEN_TO_BE_REPLACED

Tap to view larger versions.Deirdre Hargrove-Krieghoff: In support of the continued work of developing a thriving workforce, the HR team conducted a survey of the 10 largest districts in the State of Wisconsin as well as districts in Dane County to provide a picture of our current compensation standing. It is our intent to develop … END_OF_DOCUMENT_TOKEN_TO_BE_REPLACED

Where have all the students gone?
Madison School Board President Ed Hughes:

Esenberg sets out to identify the fundamental differences between voucher advocates and opponents. His thesis is that views on vouchers derive from deeper beliefs than objective assessments of how well voucher schools perform or concerns about vouchers draining funds from public schools. To him, your take on vouchers depends on how you view the world.
Esenberg asserts that voucher advocates are united by their embrace of three fundamental principles: that a centralized authority is unlikely to be able to decide what is best for all; that families should be trusted to select their children’s schools since ordinary people are capable of making choices for themselves without paternalistic direction; and that “government does not do diversity, experimentation and choice very well.”
By implication, he asserts that voucher opponents think that a centralized authority will be able to decide what’s best for all, that families shouldn’t be trusted to make choices for their children, and that government control is the best way to foster innovation.
And there you have it. Your views on school voucher expansion are entirely explained by whether you prefer individual freedom, like the voucher advocates, or stultifying government control, like the voucher opponents. In cinematic terms, voucher opponents are the legions of lifeless, gray drones in Apple’s famous 1984 commercial and voucher supporters are the colorful rebel, bravely challenging the control of Big Brother and hurling her sledgehammer to smash mindless conformity. You couldn’t ask for a more sophisticated analysis than that, could you?
While his thesis invites mockery, Esenberg’s short article does present a bit of a challenge to voucher opponents like myself. Can we set out a coherent justification for our opposition that doesn’t depend on the facts that voucher schools drain needed resources from public schools and don’t perform any better? Sweeping those fairly compelling points aside, Esenberg asks, in effect, what else you got?

Mr Hughes anti-voucher rhetoric is fascinating on several levels:
1. The Madison School District’s long term, disastrous reading results. How much time and money has been wasted on anti-voucher rhetoric? Reading has long been job one.
2. Local private schools do not have much, if any availability.
3. Madison spends double the national average per student (some of which has been spent on program explosion). Compare Milwaukee Public and Voucher Schools’ Per Student Spending.
4. Madison’s inability to address its long-term disastrous reading results will bring changes from State or Federal legislation or via litigation.
5. Superintendent Cheatham cited Long Beach and Boston as urban districts that have “narrowed the achievement gap”. Both districts offer a variety of school governance models, which is quite different than Madison’s long-time “one size fits all approach”.
I recall being astonished that previous Madison School District administrators planned to spend time lobbying at the State level for this or that change – while “Rome is burning“. Ironically, Superintendent Cheatham recently said:

“Rather than do a lot of work on opposing the voucher movement, we are going to focus on making sure our schools are the best schools possible and the schools of choice in Madison,” Cheatham said.

This points up one of the frustrating aspects of trying to follow school issues in Madison: the recurring feeling that a quoted speaker – and it can be someone from the administration, or MTI, or the occasional school board member – believes that the audience for an assertion is composed entirely of idiots.

A great, salient quote. I would hope that the District would focus completely on the matter at hand, disastrous reading scores. Taking care of that problem – and we have the resources to do so – will solve lots of other atmospheric and perception issues.
In closing, I sense politics in the voucher (and anti-open enrollment) rhetoric. Two Madison School Board seats will be on the Spring, 2014 ballot. One is currently occupied by Mr. Hughes, the other by Marj Passman. In addition, local politics play a role in becoming school board President.

Superintendent Cheatham’s slides follow (4MB PDF version). I hope that the prominence of Madison’s disastrous reading scores – slide 1 – indicates that this is job one for our $15,000ish/student organization. 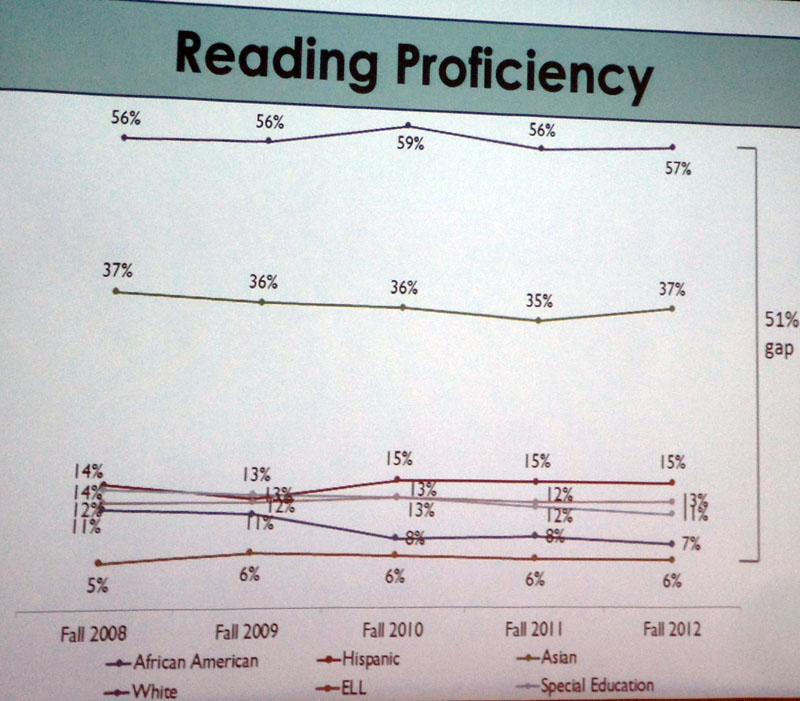 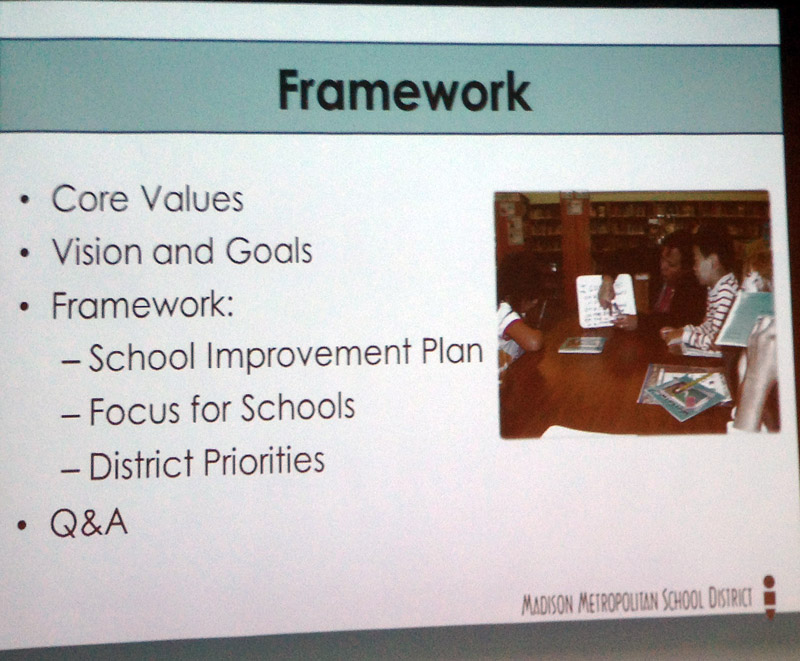 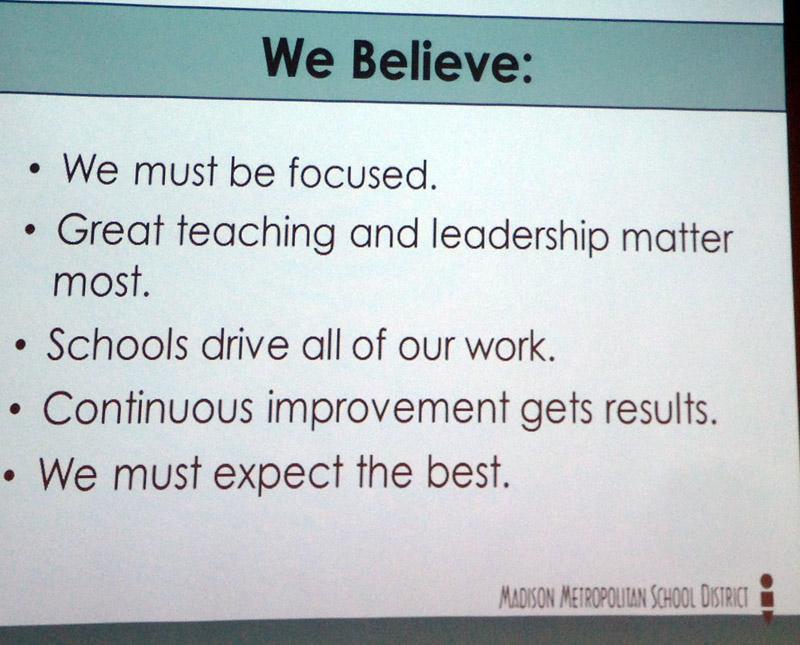 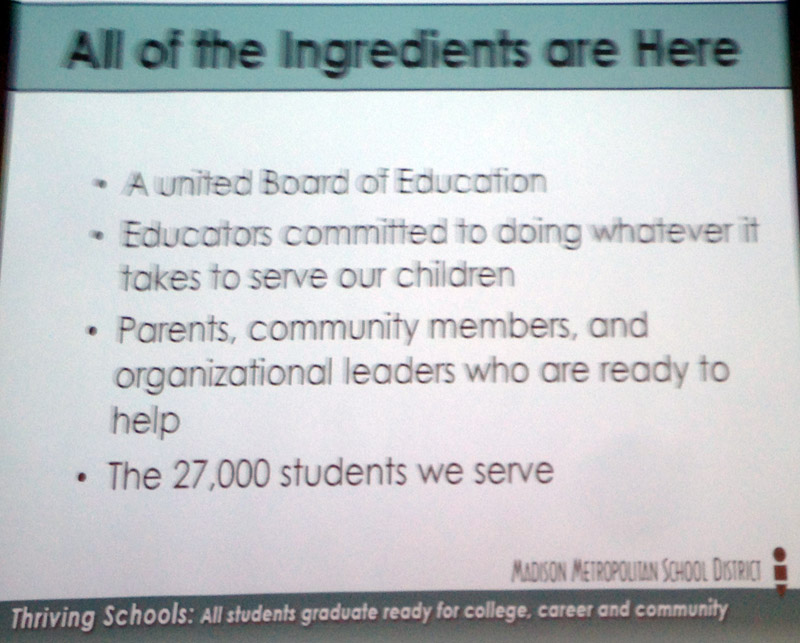 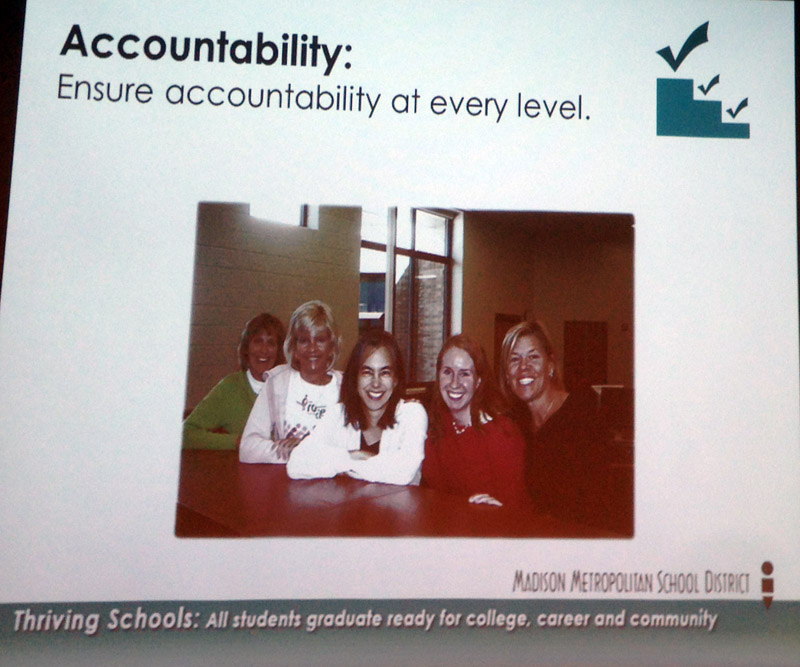 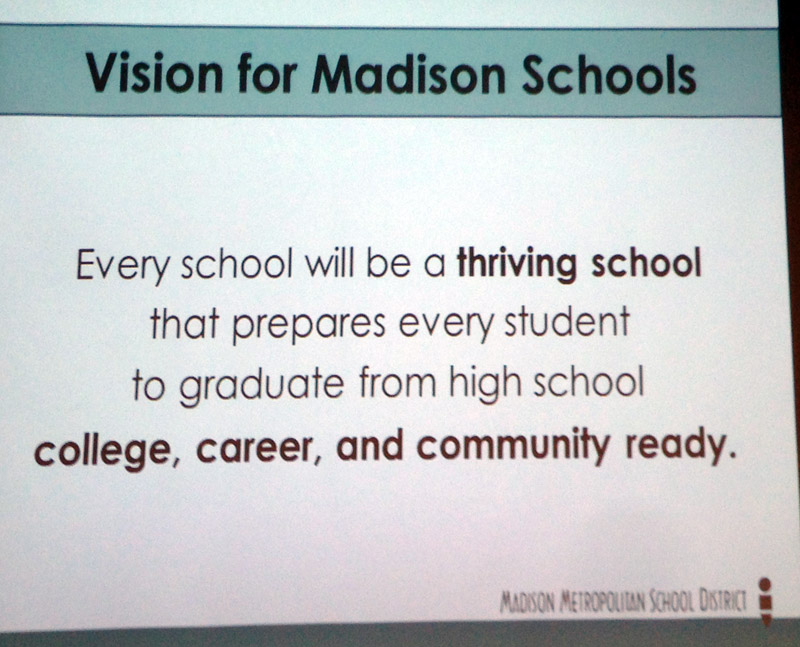 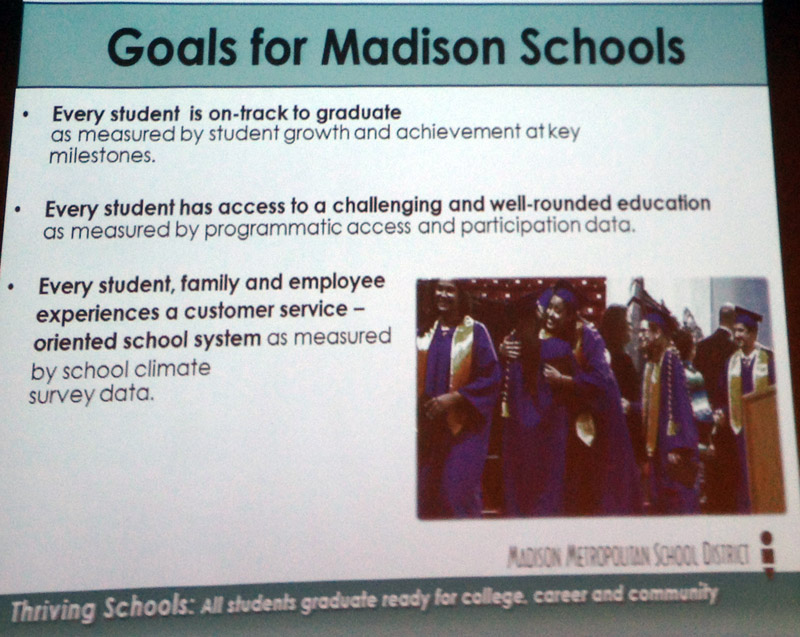 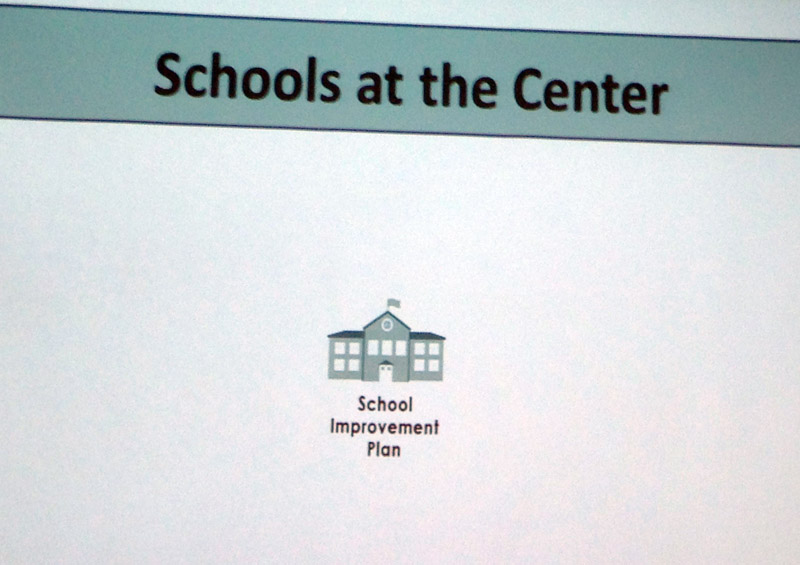 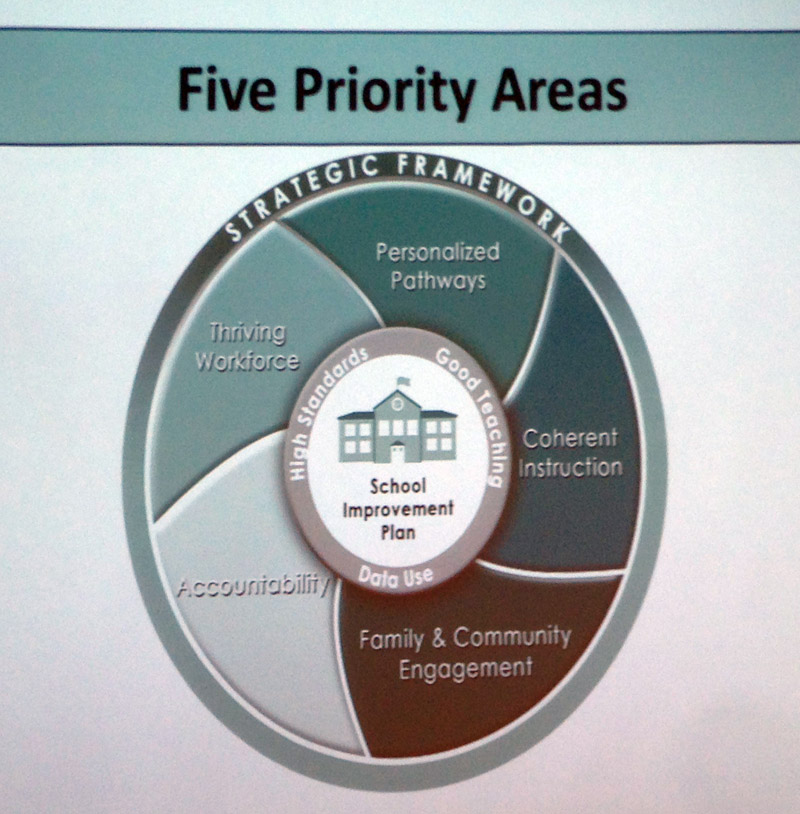 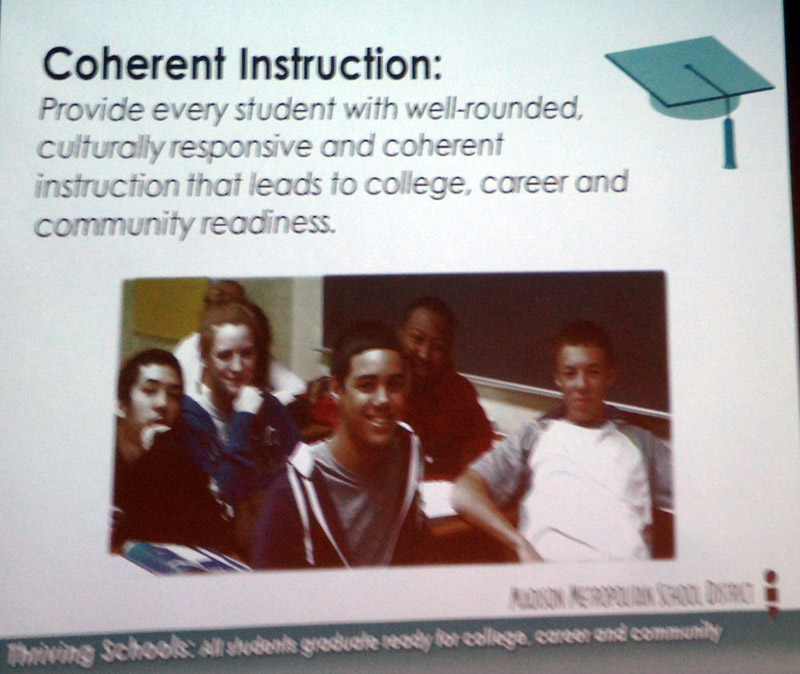 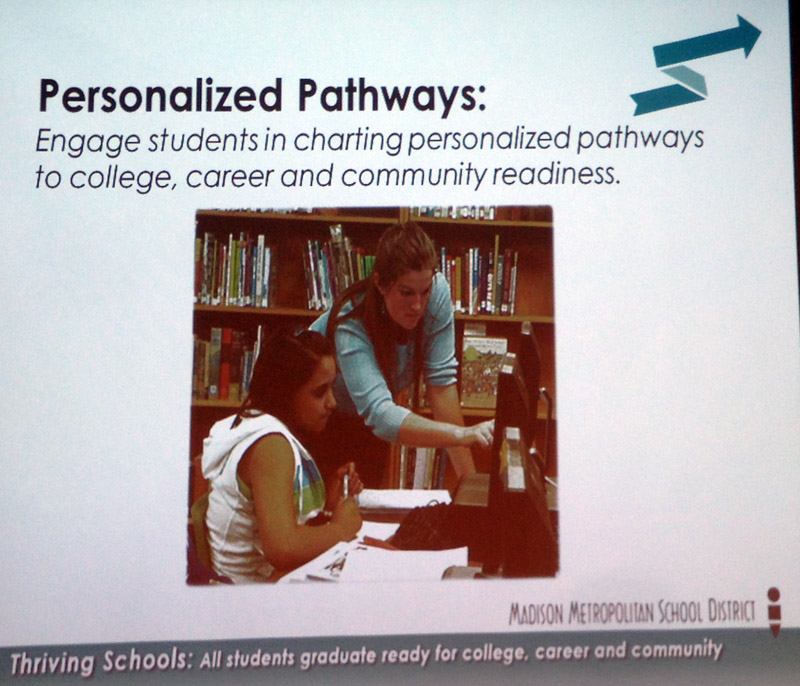 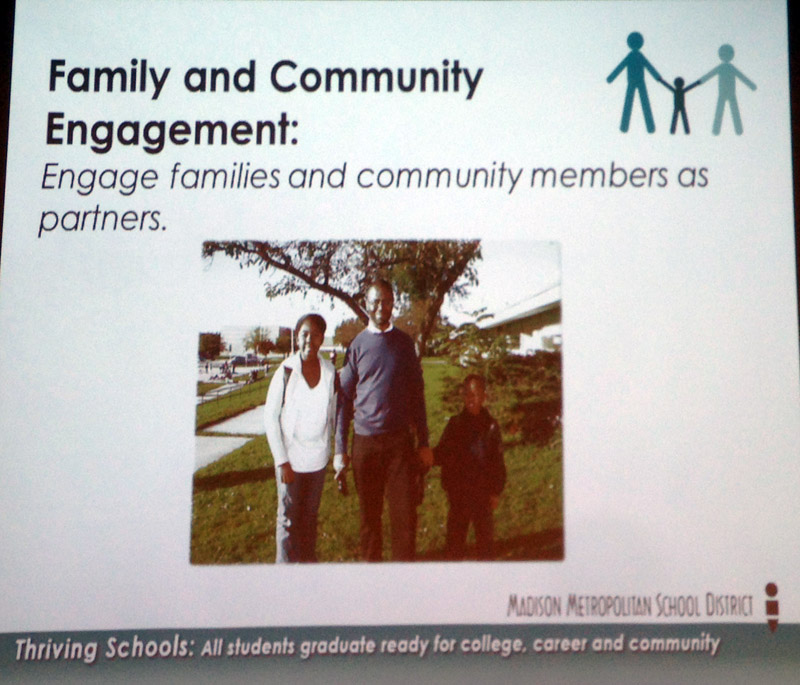 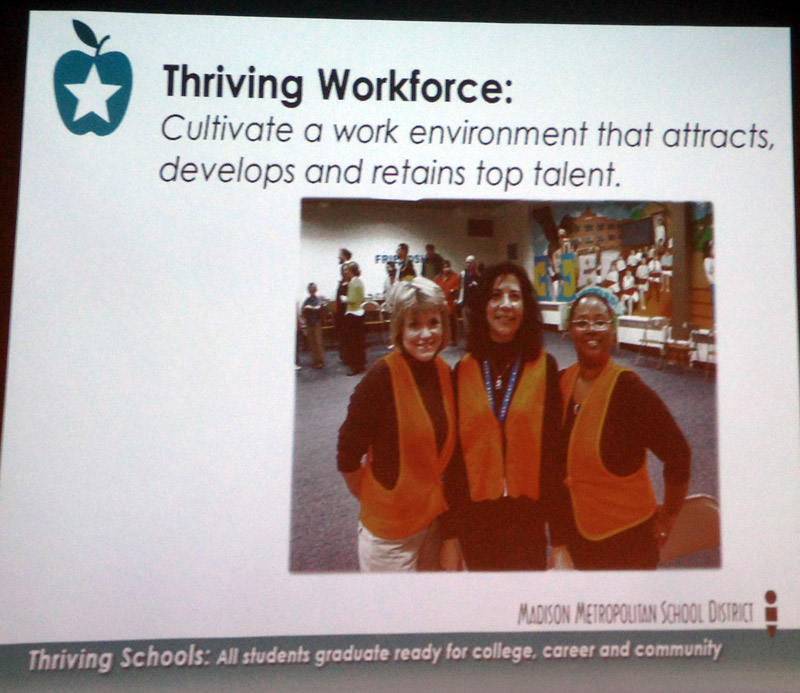 A few of the Superintendent’s words merit a bit of analysis:
1. “What will be different this time?” That rhetoric is appropriate for our Madison schools. I compiled a number of notes and links on this subject, here.
2. “Ready to partner with local businesses and other organizations”. Great idea. The substance of this would certainly be a change after the Madison Preparatory Academy IB Charter school debacle (Urban League) and, some years ago, the rejection of Promega’s kind offer to partner on Madison Middle Schools 2000.
3. Mentions “all Madison schools are diverse”. I don’t buy that. The range of student climate across all schools is significant, from Van Hise and Franklin to LakeView, Mendota and Sandburg. Madison school data by income summary. I have long been astonished that this wide variation continues. Note that Madison’s reading problems are not limited to African-American students.
4. Mentioned Long Beach and Boston as urban districts that have narrowed the achievement gap. Both districts offer a variety of school governance models, which is quite different than Madison’s long-time “one size fits all approach”.
5. Dave Baskerville (www.wisconsin2.org) asked a question about benchmarking Madison students vs. the world, rather than Green Bay and Milwaukee. Superintendent Cheatham responded positively to that inquiry. Interestingly, the Long Beach schools prominently display their status as a “top 5 school system worldwide”.
6. “Some teachers and principals have not been reviewed for as long as 7 years”. This points to the crux of hard decision making. Presumably, we are at this point because such reviews make no difference given rolling administrator contracts and a strong union umbrella (or floor depending on your point of view). Thus, my last point (below) about getting on with the hard decisions which focus the organization on job number one: reading.
Pat Schneider and Matthew DeFour summarize the Superintendent’s press release and appearance.
Finally, I found it a bit curious that the Superintendent is supporting spending (and related property tax growth) for current programs in light of the larger strategy discussed today along with the recent “expert review”. The review stated that the “Madison School District has resources to close achievement gap”
This would be a great time to eliminate some programs such as the partially implemented Infinite Campus system.
Superintendent Cheatham’s plan indicates that choices will be made so that staff and resources can focus on where they are most needed. I wholeheartedly agree. There is no point in waiting and wasting more time and money. Delay will only increase the cost of her “strategy tax“.