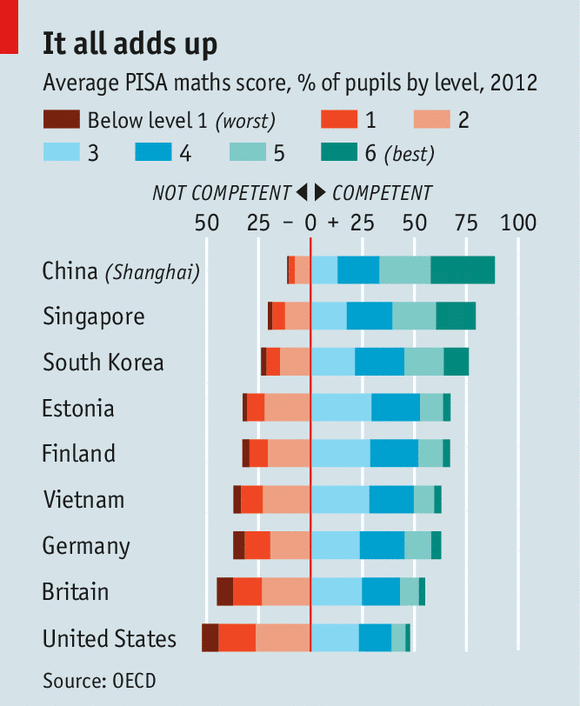 IF THE world’s education systems have a common focus, it is to turn out school-leavers who are proficient in mathematics. Governments are impressed by evidence from the World Bank and others that better maths results raises GDP and incomes. That, together with the soul-searching provoked by the cross-country PISA comparisons of 15-year-olds’ mathematical attainment produced by the OECD, a club of mostly rich countries, is prompting educators in many places to look afresh at what maths to teach, and how to teach it.
Those countries languishing in the league tables fret about how to catch up without turning students off the subject with boring drill. Top performers, most of them Asian (see chart), fear that their focus on technical proficiency does not translate into an enthusiasm for maths after leaving school. And everyone worries about how to prepare pupils for a jobs market that will reward creative thinking ever more highly.
Maths education has been a battlefield before: the American “math wars” of the 1980s pitted traditionalists, who emphasised fluency in pen-and-paper calculations, against reformers led by the country’s biggest teaching lobby, who put real-world problem-solving, often with the help of calculators, at the centre of the curriculum. A backlash followed as parents and academics worried that the “new math” left pupils ill-prepared for university courses in mathematics and the sciences. But as many countries have since found, training pupils to ace exams is not the same as equipping them to use their hard-won knowledge in work and life.