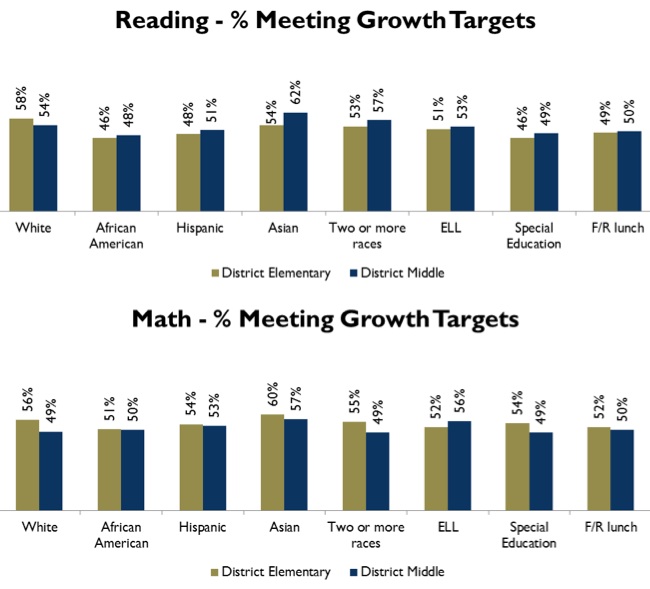 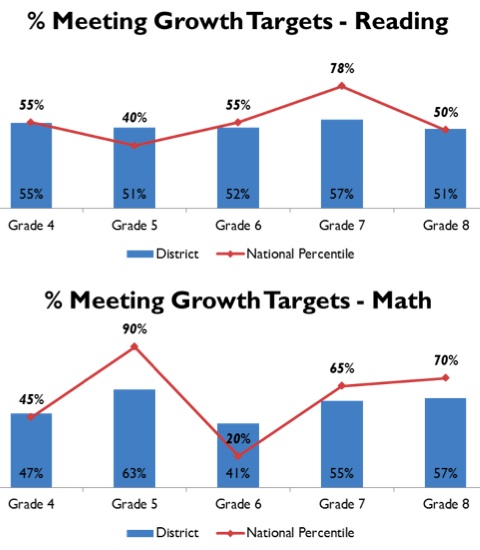 Unlike other assessments, MAP measures both student performance and growth through administering the test in both fall and spring. No matter where a student starts, MAP allows us to measure how effective that student’s school environment was in moving that student forward academically.
This fall’s administration serves as a baseline for that fall to spring growth measure. It also serves as an indicator for teachers. As we continue professional development around MAP, we will work to equip schools to use this data at the classroom and individual student level. In other words, at its fullest use, a teacher could look at MAP data and make adjustments for the classroom or individual students based on where that year’s class is in the fall, according to these results.
Meeting growth targets on the fall administration indicates that a student met or exceeded typical growth from Fall 2011 to Fall 2012. Typical growth is based on a student’s grade and prior score; students whose scores are lower relative to their grade level are expected to grow more than students whose scores are higher relative to their grade level.
In Reading, more than 50% of students in every grade met their growth targets from Fall 2011 to Fall 2012. In Mathematics, between 41% and 63% of students at each grade level met their growth targets. The highest growth in Mathematics occurred from fourth to fifth grade (63%) and the lowest growth occurred from fifth to sixth grade (41%).
It is important to note that across student groups, the percent of students making expected growth is relatively consistent. Each student’s growth target is based on his or her performance on previous administrations of MAP. The fact that percent of students making expected growth is consistent across student subgroups indicates that if that trend continues, gaps would close over time. In some cases, a higher percentage of minority students reached their growth targets relative to white students. For example, at the middle school level, 49% of white students met growth targets, but 50% of African American students and 53% of Hispanic students met their growth targets. In addition, English Language Learners, special education students, and students receiving free and reduced lunch grew at similar rates to their peers.
MAP also provides status benchmarks that reflect the new, more rigorous NAEP standards. Meeting status benchmarks indicates that a student would be expected to score “Proficient” or “Advanced” on the next administration of the Wisconsin Knowledge and Concepts Examination (WKCE).
That means that even though overall scores haven’t changed dramatically from last year, the percent of students identified as proficient or advanced will look different with these benchmarks. That is not unique for MMSD – schools around the state and nation are seeing this as they also work toward the common core.
While these scores are different than what we have been used to, it is important to remember that higher standards are a good thing for our students, our districts and our community. It means holding ourselves to the standards of an increasingly challenging, fast-paced world and economy. States all around the country, including Wisconsin, are adopting these standards and aligning their work to them.
As we align our work to the common core standards, student achievement will be measured using new, national standards. These are very high standards that will truly prepare our students to be competitive in a fast-paced global economy.
At each grade level, between 32% and 37% of students met status benchmarks in Reading and between 36% and 44% met status benchmarks in Mathematics. Scores were highest for white students, followed by Asian students, students identified as two or more races, Hispanic students, and African-American students. These patterns are consistent across grades and subjects.
Attachment #1 shows the percentage of students meeting status benchmarks and growth targets by grade, subgroup, and grade and subgroup. School- and student-level reports are produced by NWEA and used for internal planning purposes.